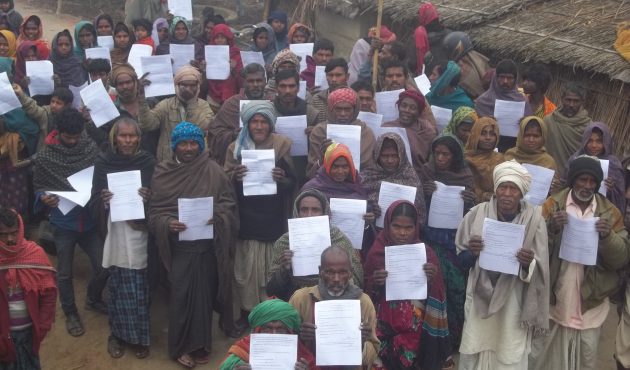 We just received news from our NGO partner, TSN, based in the state of Bihar, India that a village anti-trafficking group that it set up early in 2016 has had a major success.  It won legal rights to land for housing for 68 families who are highly vulnerable to trafficking.  TSN explained that having a secure place to live will give these families a sense of identity and dignity, as well as stability that reduces the risks from the traffickers.

It’s the first step in a major effort to get rights to land for hundreds of families in the village:  In January 2016, TSN had carried out a survey in this village and found that as many as 477 households of dalits (castes that have been treated as “untouchables”) were living outside the village on the very edge of the road.  They found out that four years ago, the families had been pushed off their land by an influential person who took advantage of their disunity and their lack of legal papers.  The person occupied a big area of their land and was able to build a boundary wall to keep them out, because of his influence with local government officials.

Seeing this, the 477 households shifted and quickly constructed huts on the roadside.  Without any security, TSN could see that the families were likely to be prey to the traffickers, and in fact the village was being used as a base for traffickers.  So in March 2016, TSN set up a Community Vigilance Committee (CVC) among the families.  Several members of the community emerged as leaders and collectively they worked towards the priority of getting land for housing.

As part of this, they lodged a complaint against their eviction with the Chief Minister of Bihar using the system of direct public complaints, to which officials are required to respond.  When they got no response, they took the copy of their complaint to the TSN lawyer, and he recommended they go to court under Bihar’s Right to Public Grievance Redressal Act.  After five different hearings, the court ordered the government to provide housing land to 68 of the families and required them to spend Rs.6,800,000 (almost $100,000) to buy the land.  The legal process for the land rights of the remaining 409 families is continuing.

After many years of violation of their rights, it’s a great success for the CVC and its leaders, helping to protect them from trafficking.

Pictured: Families in Bihar holding court judgement papers requiring government officials to purchase and provide land for housing for them within 30 days.