CLOSE
Home / Newsroom / Blog / Freedom Fund Updates / Remarks by Nick Grono to the UN Security Council debate on Trafficking in Persons in Situations of Conflict: ISIL and Beyond

Remarks by Nick Grono to the UN Security Council debate on Trafficking in Persons in Situations of Conflict: ISIL and Beyond 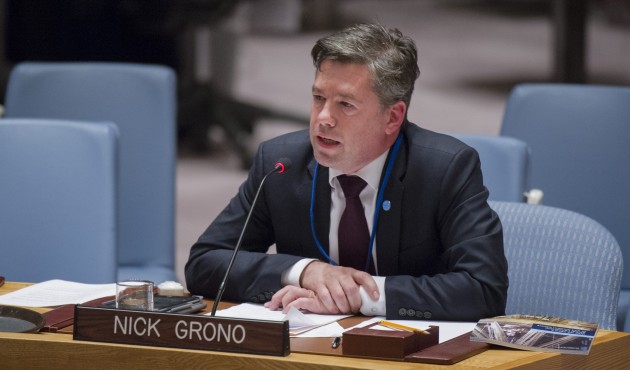 The UN Security Council debate on 16 December 2015 on Trafficking in Persons in Situations in Conflict was the first time that the Security Council has ever held a hearing on the issue of human trafficking and modern slavery. Our CEO Nick Grono was one of two non-UN experts asked to brief the Council. The other was Nadia Taha, a Yazidi survivor of ISIS enslavement.

Thank you for taking up the critically important issue of human trafficking in conflict.

The reality is that armed conflict leaves civilians vulnerable to extreme forms of exploitation – such as forced labour, slavery and slavery-like practices.

We are seeing this most starkly right now with the enslavement of Yazidi women and girls by ISIS.

The massive displacement of civilian populations that usually accompanies conflict also facilitates the movement of people into these highly exploitative situations.

This “movement for the purpose of exploitation” is the very definition of human trafficking provided by the Palermo Protocol.

The connection between conflict and human trafficking is not new, and often involves violations of other international norms – against slavery, forced labour, torture and enforced disappearance.

As highlighted in the recent report by the Freedom Fund and the UN University, Unshackling Development, authored by Dr James Cockayne – for almost a century the League of Nations and the UN system have addressed human trafficking, forced labour and traditional forms of slavery all together.

In World War II there was widespread enslavement, forced labour and sexual slavery, and these crimes were prosecuted and condemned by the Nuremburg Military Tribunals and the Tokyo Tribunal.

More recently, Security Council-backed tribunals have found that human trafficking, sexual slavery and forced labour have all played a key role in conflicts, too – in the Balkans, West Africa, and Cambodia.

The important work of these tribunals has helped make clear that there will be no impunity for slavery crimes.

But unfortunately, the connection between conflict, slavery and human trafficking only seems to be growing.

The most glaring connections relate to ISIS and Boko Haram.

In most conflicts slavery is largely hidden, because it is utterly taboo. But ISIS and Boko Haram are both directly challenging that taboo.

Over 3,000 Yazidi women and girls are thought to be currently enslaved by ISIS, which is advocating for the revival of slavery through official policy and media outlets. It is organizing slave markets and contract registries, and even issuing official ‘how-to’ manuals.

ISIS has institutionalized slavery and sexual violence in order to increase recruitment, by promising male fighters access to women and girls; populate a new “caliphate” through forced pregnancy; terrorize communities into compliance; displace populations from strategic areas; and generate revenue through trafficking, the slave trade and ransoms.

We’ll be hearing shortly from Nadia Taha on the unimaginable reality of enslavement by ISIS.

It has abducted over 2,000 people. Its leader, Abubakar Shekau, has proclaimed that the hundreds of women and girls it has kidnapped will be forced into marriage with his fighters, or be sold “in the market”.

Boko Haram’s abduction and enslavement practice is widespread and systematic, and based on an organisational policy of enslavement – meeting the tests that likely mean it is also a crime against humanity.

More broadly, conflicts in Iraq, Syria, Libya, and the Sahel are all displacing huge numbers of people and leaving them vulnerable to human trafficking and enslavement.

Individuals displaced from these conflicts are also being exploited elsewhere – including in forced marriage, domestic work, on construction sites, and in commercial sexual exploitation, both in the Middle East and North Africa, and further afield.

Increasingly closed borders, and a growing unwillingness by wealthier states to accept refugees exacerbate these problems.

As do failures by officials in states with a high incidence of trafficking to enforce the laws already in place.

Conflict is the source of this displacement and vulnerability. It is the engine that drives the growth of these human trafficking networks.

The same is true in south-east Asia, particularly in relation to displacement from Myanmar which is driving Rohingya into forced labour – including in the supply-chains that provide seafood to Western supermarkets.

Even if individuals set out on what they believe is voluntary migration, they may discover, along the way or upon arrival, that they are subject to illegal exploitation—and are thus the victims of human trafficking.

And sometimes this human trafficking does not even involve crossing international borders.

Many of the conflicts with which the Council is wrestling in Africa are also driven by industrial-scale exploitation of conflict resources, fuelled by forced labour.

In this respect, it is worth noting that the Council has taken important steps to encourage corporate due diligence to prevent conflict resources from the DRC, Eritrea and Somalia entering global supply chains.

In other cases, the human trafficking involved is the movement of children into forced labour for armed groups – as we have seen so gruesomely with the Lords Resistance Army in Uganda and neighbouring countries.

Finally, it is also clear that in at least one other situation already on the agenda of the Security Council, that of the Democratic People’s Republic of Korea, there are questions, not about non-state armed groups, but state involvement in human trafficking.

In his recent report to the UN General Assembly, the Special Rapporteur on human rights in the DPRK, claimed that up to 50,000 North Koreans have been sent to work abroad in conditions that amount to forced labour and human trafficking, to circumvent United Nations sanctions and earn up to $2.3bn in foreign currency for the country.

What more could the Security Council do?

The Council could take several more robust steps to address this terrible scourge.

First, the Council should send a strong deterrent signal to armed groups, by calling this widespread and systematic, organised policy of human trafficking what it legally is: a crime against humanity.

This would signal that those responsible are subject to prosecution, not just in the ICC, but by any state with jurisdiction.

Second, the Security Council should make clear that it wants all parts of the UN system to work more effectively together to help countries tackle modern slavery in conflict zones.

At present the UN’s efforts are fragmented and poorly coordinated, and the peace operations and peacebuilding actors of the UN are hardly involved at all.

The Security Council should call on the UN Secretary-General to appoint a time-bound Special Envoy for the next three years to develop system-wide guidance to help UN actors figure out how to work better together – and establish a strong global partnership with the private sector and civil society.

Third, the Security Council should tackle the drivers of this problem by asking the Special Envoy to develop effective supply-chain measures to ensure that legitimate businesses do not unwittingly encourage human trafficking from conflict zones. These could draw on lessons learnt from the corporate due diligence guidelines on conflict minerals, as well as recent legislation and regulation in some member states on supply chain transparency.

So let me finish by thanking you again for taking up this critically important issue on which the United Nations has such an important leadership role to play. It will only be with such leadership that slavery may eventually become a relic of history.

Read the statement by the President of the Security Council on Trafficking in Persons in situations of conflict.