Evidence in Practice: Issue 1 – Evaluation of the MSEMVS community-driven model to eradicate modern slavery in India 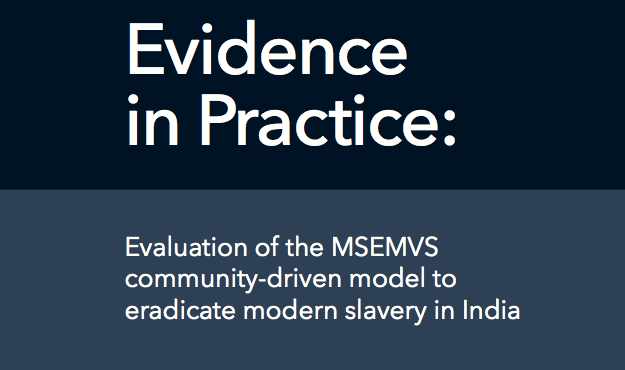 April 5, 2016 / Evidence in Practice, Our Reports The Freedom Fund / @freedom_fund

In September 2014, the Freedom Fund commissioned a team at the Francois-Xavier Bagnoud (FXB) Center for Health and Human Rights at the Harvard School of Public Health to conduct an independent evaluation of the intervention model used by one of our partners in Northern India, MSEMVS. The focus of the evaluation was to explore the extent to which MSEMVS had successfully eradicated forms of modern slavery in target communities, and to quantify the resulting socio-economic benefits.

MSEMVS is an Indian NGO that supports rural communities, primarily of “low caste” residents, to work together, enabling them to eradicate all forms of modern slavery in their community, including bonded labour and human trafficking.

The approach has several distinctive elements including ownership of the work by the local community groups; working with these groups towards the specific intended goal of full eradication; and using the combination of children’s transitional education, training in human rights and legal rights, women’s empowerment, and economic independence strategies.