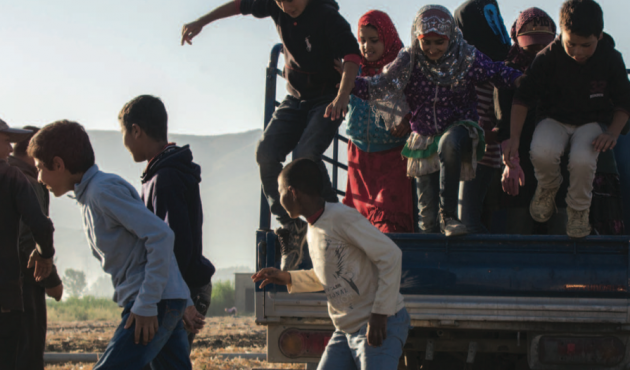 London: The recent rescue of 75 women from sex slavery in Beirut, most of them Syrian, was a stark demonstration of the very real risk of slavery and exploitation faced by Syrian refugees in Lebanon.

With the Syrian conflict entering its fifth year, a new report from the Freedom Fund has found that slavery amongst Syrians fleeing conflict is becoming increasingly prevalent in Lebanon.

The report, “Slavery and exploitation of Syrian refugees in Lebanon,” concludes that a vast majority of Syrian refugee children, and virtually all children in the Bekaa Valley, are put to work, with many of them being exposed to hazardous conditions, always for little pay.

According to those interviewed, there is high demand among Lebanese employers for Syrian and Palestinian children, as they are far cheaper to employ than adults – and also more compliant.

Nick Grono, CEO of the Freedom Fund says: “Slavery and human trafficking are illegal and abhorrent. They should never be condoned or accepted as ‘the norm’. This report is call for decisive action. Without significant and determined intervention, the situation will only worsen for many hundreds of thousands of refugees at risk of extreme exploitation.”

One leading NGO estimated that between 60 and 70 percent of Syrian refugee children are working, with child labour rates even higher in the Bekaa Valley, where they pick beans, figs and potatoes in dangerous conditions.

Child marriage is also particularly prevalent amongst communities where families cannot afford to care for their future and see marriage as their only coping strategy.

The report highlights how restrictive conditions on residency and work are making it impossible for refugee adults to go to work, and for families to earn an income, pushing children to work in their place, for a meagre, but often critical income.

The report draws on interviews with Syrian refugees in Lebanon, representatives from Lebanese NGOs, Syrian organisations, INGOs in Lebanon, UN bodies and Lebanese government officials conducted during January and February 2016, as well as reviews other recent research reports and vulnerability assessments.

According to one refugee interviewed for the report, forced labour is so widespread as to constitute the norm.

“With my brother, who sewed, his employer would take a portion of his salary and keep it. In this way he has to continue working for him.” (Syrian refugee, Beirut)

“We can no longer say we did not know. The exploitation of Syrian refugees in Lebanon is endemic and I encourage the Lebanese government and international community to adopt the recommendations in the report,” said Grono.