A space to experience freedom 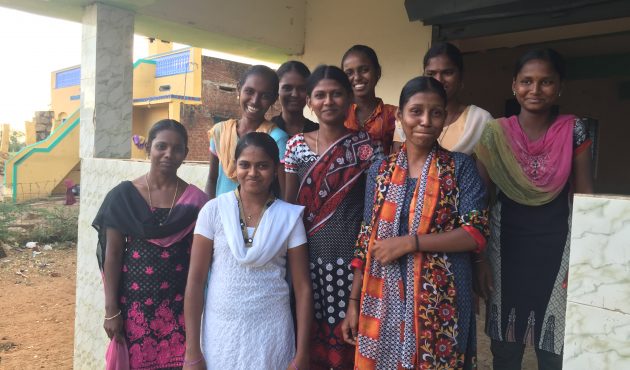 One of the Freedom Fund’s partners in southern India is an NGO called Vaan Muhil.  It’s part of our “hotspot” program, along with ten other local NGOs, committed to ending forms of bonded labour in Tamil Nadu’s textile industry and to improving conditions within this important industry.  One strategy is support for adolescent girls’ groups.  In a village in Virudhnagar district, a few days back I met with one of these groups that has been meeting regularly for about nine months. Aged between 16 to 23, the 12 members that we met included eight current spinning mill workers.  Their efforts to get a better chance in life are quite astonishing.

Early in the meeting, I asked whether anyone needed to rush off to work, and how long we could meet for.  One 18 year old girl told us she had already worked a double shift at the mill – 16 hours, so didn’t need to rush off. It was beyond me to imagine how tired she must be, having walked up and down tending the rows of spindles in the intense heat for that length of time.  My colleague Bala asked her “how often do you have to do that?” “Occasionally” she responded.  “About how often?” he pressed. “About once a week,” she said.  The machines must be kept running, so if other workers are away, then the workers remaining must work longer hours.  For the second shift she earns exactly the same as for the first shift:  An extra Rs.160, or about $2.40.

After years working at the mills, these workers have never seen a payslip, and never been added to employers’ legally-required health insurance and provident fund.  And these are not small businesses – in this girl’s mill, there are about 300 workers.

On some of the days when she “only” works one eight-to-ten hour shift, the girl goes to a computer class.  Nearby there is a large printing business so if the young women can learn desktop publishing and basic keyboard skills, they have a good chance to get a decent job.  At first it had seemed impossible to travel even the 5km to the classes. This community is especially affected by cultural restrictions on movement out of the village by girls and women, and there’s little public transport from anywhere nearby.  But the group came up with the idea of collectively paying for an auto-rickshaw so that eight of them could crowd in and get to the classes.

The next problem was to convince their parents that it would be OK. Vaan Muhil has also formed an adult Community Support Group (CSG) to support the girls’ group’s efforts.  The young women asked the CSG to convince their parents to allow the young women to attend the classes.  The parents were resistant, but the CSG members know that without this training, the girls will be stuck at the mill for many years, till either their health breaks down or they get married and have a baby.  So the CSG members talked the parents into agreeing. 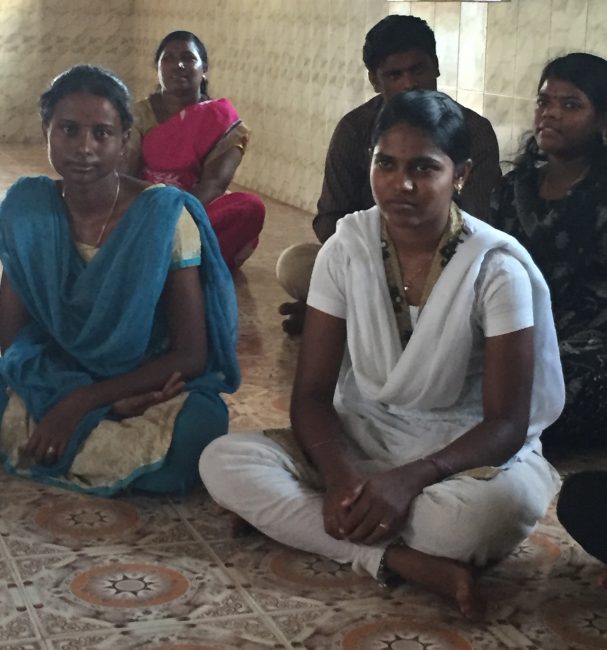 Members of the girls’ group are starting to find other ways out of the mills. The sister of the girl in black (pictured above) desperately wanted to leave work in the mill and go back to school.  Once again, the girls’ group spoke to the CSG and they sat with the parents, persuading them to let her go back.  Now she sits in the group in her school uniform.

Likewise, the girl in white (above) managed to complete a training in tailoring, alongside her daily mill work, and now takes bulk orders, for example for special bags given out at weddings.  The money she makes contributes about as much to the family income as she would have received at the mill, but she can work from home in safer conditions and can continue to improve her skills in order to make a better income.  She says that some of the older women in the village have seen what she’s doing and they are now demanding to do the same. 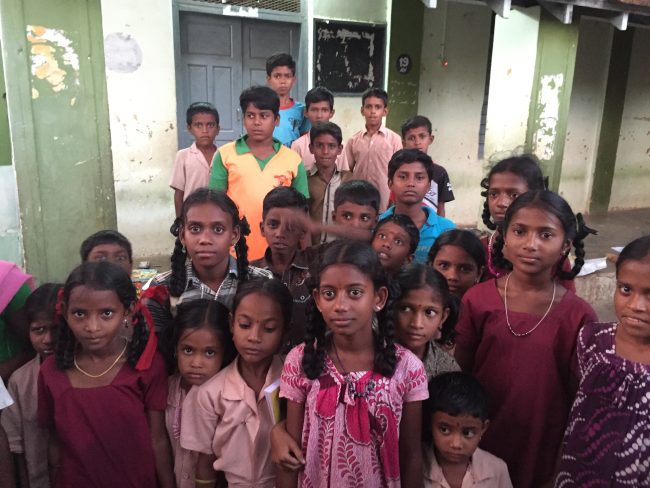 The oldest member, the group’s President, aged 23, is also running the children’s tutoring centre linked to the program. She explained that the restrictions on the group members’ movement are breaking down.  The young women still have to struggle with their relatives if they need to go anywhere, but now they usually win.  She says “They see the changes in us.  We can move freely out of the village.  The group has given us a space to experience freedom”.

The Vaan Muhil group is one of 11 Freedom Fund partners currently working in our Southern India hotspot program in the state of Tamil Nadu. The program aims to reduce bonded labour in textiles, especially affecting girls and young women in spinning mills.