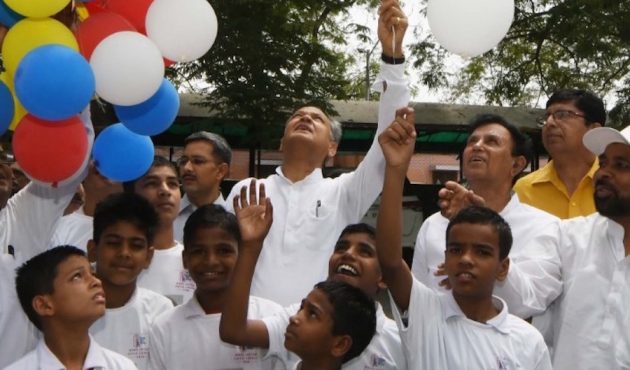 At an event organised by the Pink City Cycle Rickshaw Chalak Sanstha (PCCRCS), Rajasthan’s Chief Minister joined children who participate in the Child Labour Free Jaipur (CLFJ) Initiative, as well as the Director of the Department for Child Rights, the Child Welfare Committee Chairperson and the District Magistrate of Jaipur to launch a signature campaign against child labour, due to culminate on 2 October, Mahatma Gandhi’s birthday.  The mass signature campaign will show public support for collective efforts to stop child labour.

Children from the neighbourhoods where CLFJ is prioritising work to eliminate child labour brought along signs with messages like “Education brightens children’s future: Child Labour darkens their future”. The Chief Minister shared the children’s views, emphasising the injustice done to each new generation if they are engaged in child labour. He urged government, local NGOs, child rights activists and every citizen to join together to tackle child labour. He said that information from local groups could help the state government to prepare a comprehensive plan to address the problem. As part of his address, he highlighted the efforts of concerned businesses to ensure that there is no child labour in their supply chains, recognising the work of Mr Atul Poddar, Joint Secretary of the Federation of Rajasthan Handicraft Exporters.