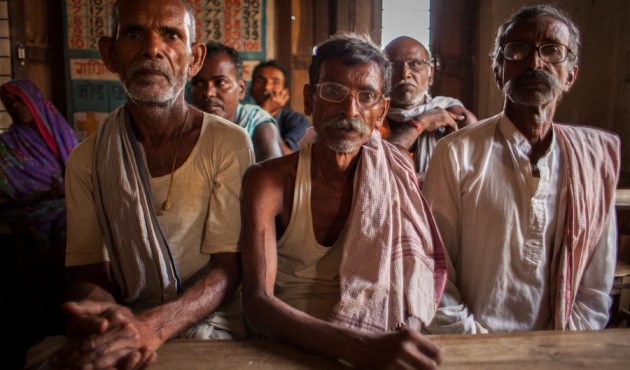 Baldev lives in Saptari district in south-eastern Nepal, where the harwa-charuwa system of forced labour is common, in which men work as agricultural labourers and women work as domestic servants. At a young age, Baldev began working for a local landlord as a cattle herder, taking cattle to nearby fields for feeding. Just a few years later, he became an agricultural labourer. After getting married at the age of 17, Baldev’s wife started working for the same landlord as a domestic worker. Despite both of their incomes, Baldev and his wife had trouble supporting their six children. They were not able to enrol their children in school because of their insufficient income.

When the Harwa-Charuwa Strengthening Program was started by Utpidit Dalit Samaj (UDS), a Freedom Fund partner, Baldev began participating in non-formal education classes offered by the organisation. UDS is an NGO that was established and registered in 2005 by members of the dalit castes, traditionally considered “untouchables”. Since the organisation’s inception, its mission has been to empower dalit populations, providing education, health and public awareness programs to vulnerable communities. Through its Freedom Fund project, UDS seeks to improve awareness of agricultural bonded labour and strengthen the capacity of harwa-charuwa community members so that they can advocate for their rights and eventually withdraw from situations of agricultural bonded labour.

Baldev and his wife also joined one of the UDS’s savings and credit groups. Through his involvement in these program activities, Baldev was selected by UDS to participate in a five-day skills training course focused on making bamboo chairs. After graduating from the training, Baldev had difficulty applying his newly learned skills as he was not able to fund the start-up costs needed to produce bamboo chairs. Upon learning this, UDS provided Baldev income generation support in the amount of Rs. 14,545 ($145). After receiving this start-up funding, Baldev has established a small business making three to four bamboo chairs per day. Through the business, he is able to earn a daily wage of Rs. 300 ($3). This additional income has enabled Baldev to cover his family’s daily expenses and to save for their future.