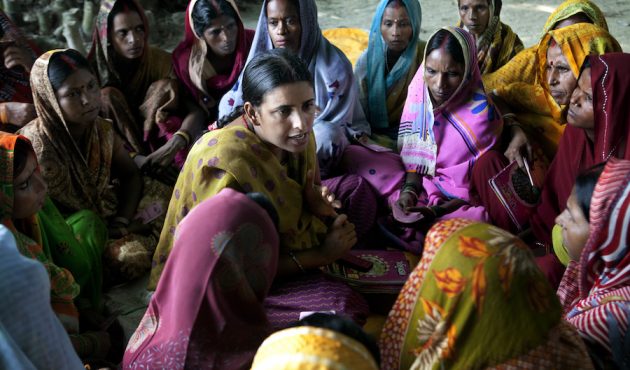 Earlier this year, I participated in a conference of the Freedom Fund’s northern India partners – about 20 civil society organisations who have been working together for four years to fight bonded labour and human trafficking in the states of Bihar and Uttar Pradesh. The organisations are all different – some focus on education and rights, others on legal strategies – but all are committed to ending the exploitation of the most vulnerable.

We were looking back over the achievements of the program since 2014. There were presentations about the impact of different community-based projects, and lessons about the most promising interventions.

But one NGO leader made a comment that really resonated with the group and kicked off an animated discussion. She remarked that the big change she had witnessed was in the network itself. She said that unlike other networks in which her organisation participated, this one had developed a level of trust, familiarity and cooperation that she had never seen before. There was very little competition and “bickering”. As a result, they were now devoting much more time to collective activities such as joint research projects and sharing their recommendations with government than they had when they first came together.

This was music to my ears, because the Freedom Fund invests an unusual amount of time and money for a donor in bringing our partners together to share lessons and develop new skills. This was a recognition of that investment. It also made me think more deeply about the less tangible things, such as trust and the absence of competition, that can turn a group of individual NGOs into something much greater than the individual parts.

In “The Mystery of Capital”, the Peruvian economist Hernando de Soto observes that around the world, some economic assets are productive beyond their physical selves, while others aren’t. A house on a street in a Western city may be both a physical shelter for a family, and at the same time, collateral on a loan to start a business. But in many developing countries, a house, or a plot of land, or a piece of machinery, often only fulfils its obvious physical function. It doesn’t also have a “parallel life” generating surplus productivity. This, he says, holds back economic development.

De Soto argues that the thing that makes individual assets start to do extra work and drive forward an economy is trust (in particular, the trust that comes from a system of property rights).

It strikes me that this is also an interesting way of thinking about civil society networks, and how they can become greater than the sum of their parts. In many settings, whether it be in the UK or India, civil society can be fragmented and divided. Organisations work in “silos”, they do their own thing, and are essentially a collection of individual projects. While they have individual impact, there is something missing that is needed to pull them together and generate collective, “surplus” impact. But if the ingredients are right, civil society organisations can collaborate and coalesce into something bigger than themselves – think of democracy and civil rights movements in India, the U.S. and South Africa.

Having now supported over 100 civil society organisations in six of the world’s slavery hotspots, our experience at the Freedom Fund is that one of the most reliable indicators of whether a program will achieve systemic impact is the strength of the partner network: To what extent are different organisations willing to collaborate with each other? How much trust and goodwill is there? Are organisations familiar with each other’s strengths and specialisms? Do they have structures and fora where they can come together, learn and make plans?

We have started calling all of this “network capital”, and are increasingly seeing it as one of our most important contributions. The reality is that in many places, NGOs are distrustful of each other, even when they share the same goals. This is in part due to having to compete for scarce donor funds. They often make different, sometimes contradictory, asks of policy-makers, which undermines their cause.

By providing long-term funding to many organisations in close proximity to each other and bringing them together regularly – and by making collaboration a prerequisite for continuation of that funding – we are able to build network capital. In some of our hotspot programs, it has taken several years to overcome distrust. But as this network capital grows, there are huge benefits. Partners are more willing to be open about challenges and weaknesses, and seek joint solutions. They are more likely to refer survivors to each other for services, which improves program quality and reduces duplication. And they are more willing to work in coalition to engage powerholders and bring about the deeper changes needed to end slavery.

All of this results in a much more effective allocation of resources and increased impact – a big win for donors, partners and, above all, the vulnerable populations we serve.