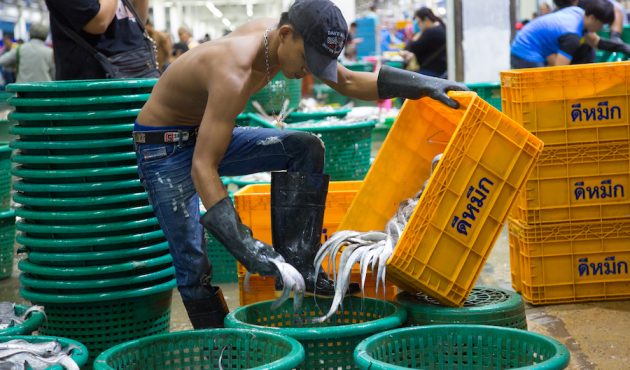 Over the last five years leading multinational companies have become far more willing to talk publicly about the risks and challenges of forced labour and modern slavery in their supply chains. This is a welcome development.

But some 25 million people are still being coerced to work around the world, despite forced labour being prohibited under international law and in every country. The challenge now is for companies to translate their rhetoric and public commitments – and their legal obligations – into concrete action at the farthest reaches of their supply chains.

For this to happen, businesses which source from low wage countries with weak rule of law must start engaging much more closely with the frontline organisations that represent and work with vulnerable communities in those countries. These frontline organisations can amplify the voices of such communities and ensure that their experiences and knowledge inform genuine efforts to end exploitation in their supply chains.

Take, for example, forced and bonded labour in the Thai seafood industry. The industry has long been heavily dependent on the forced labour of hundreds of thousands of migrants from Burma and Cambodia. Men and boys are tricked and coerced onto fishing boats and forced to work under brutal conditions.

This dirty secret began receiving high profile media coverage in 2014, following powerful reporting by the Associated Press (for which it later won a Pulitzer) and the Guardian. There was much wringing of hands by the Thai government and seafood producers, distributors and retailers – and promises to end the abuses – followed by claims that the exploitation has been largely addressed. But the workers’ organisations and migrant groups which work closely with exploited Burmese and Cambodian workers reject this. They continue to document widespread abuses throughout the industry and demand action to end them.

Of course, such exploitation is not limited to the seafood industry. Forced labour is used to produce coffee from Brazil, cocoa from West Africa, coltan from Congo and cotton goods in South Asia. The cut-throat competition to produce these goods and commodities at the lowest cost – in an environment where laws on minimum wages and conditions aren’t enforced, if they exist at all – creates structural incentives in favour of exploitation. And as those being abused are among their societies’ most vulnerable, their voices are rarely listened to.

A few governments are showing leadership on the issue. And some businesses – particularly big multinationals with consumer-facing brands – are taking steps to start addressing the abuses. We are seeing an increasing number of high-level convenings and public commitments to act. Many governments have signed up to the UK government-led Call to Action to End Forced Labour, Modern Slavery and Human Trafficking, and the International Labour Organization-led alliance to achieve Sustainable Development Goal 8.7. In the Asia Pacific region, the Bali Process and the Walk Free Foundation have provided real leadership in encouraging governments and businesses to commit to concrete plans of action. And the senior management of businesses like Unilever, Walmart, Nestle and Apple – to name a few – have committed to ensuring there is no forced labour in their supply chains.

All of this is welcome, and a very significant advance on where we were just five years ago. But we shouldn’t get carried away just yet. For the most part, these commitments have not yet translated into real change on the ground. Why is this?

For a start, we need to look at who is being exploited. The victims of these abuses are often migrants, ethnic or religious minorities, members of lower castes, women and girls – in short, they are nearly always treated as second-class citizens in their societies. Their voices are not heeded by those in power.

On the other hand, those doing the exploiting wield substantial power. They are the factory owners, the landowners, the ship captains – virtually always men – who are highly protective of their ability to extract maximum profit from those working in their supply chains, even when it is produced by forced labour.  And while many governments and businesses have the best of intentions when it comes to tackling slavery, they often don’t have the incentive to make the tough decisions required to drive genuine change when confronted by the forces opposed to change. Given the International Labour Organization’s finding that forced labour is a $150 billion a year industry, those forces should not be underestimated.

So, if we are to make real progress, we have to address these power imbalances. We need to help these exploited communities to organise and amplify their voices and become an important constituency whose interests matter. That certainly is what the Freedom Fund, the organisation I lead, believes, and why we partner with, and fund, some 100 frontline organisations in countries with a high prevalence of slavery. We are calling on governments, philanthropists and, most of all, business, to get behind this bottom-up effort.

This is not to say that work does not need to happen at the top, in the boardrooms of multinationals and the tightening of government regulation. There is no doubt that it will take committed leadership for businesses to implement the deep structural changes necessary to get a grip on their supply chains.

But top-down action will always fall short if the individuals at the base of the supply chain have no one to protect their rights and to challenge those who would exploit them.

The Freedom Fund also plans to step up its support from frontline efforts in the coming years. We have an ambitious plan to mobilise movements of frontline leaders in countries with the highest burdens of forced labour. Working with local partners we plan to set up leadership academies in these countries, to invest in and support civil society champions, and particularly women leaders – and to link these networks to help build the global movement.

That’s our big ambition. We know from the past successes of the abolitionist and emancipation movements that, working together, we can end these horrendous abuses. And those past successes are our inspiration as we strive for a world free of slavery.