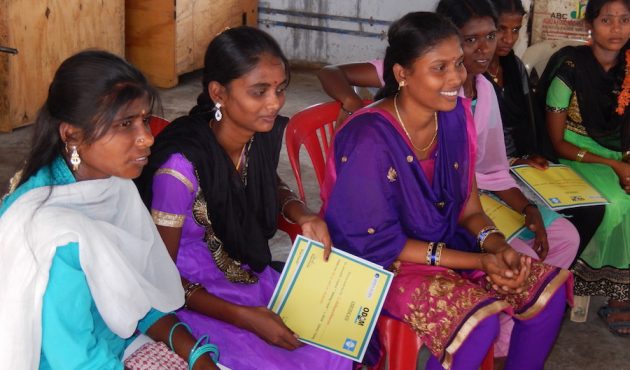 One of the Freedom Fund’s partners in southern India, the Organisation of Development Action and Maintenance (ODAM), is addressing a wide range of issues, including women’s empowerment, child welfare and rural poverty. In one village where the practice of sending adolescent girls to work in textile mills is common, ODAM has made impressive inroads challenging harmful gender norms.

Valayapatti village is composed of members of a caste in which women are particularly disadvantaged. Females are not given decision-making power, adolescent girls allowed to pursue higher education and women are forbidden from leaving the village because it is believed they will be harassed outside the village borders. Girls are only allowed to leave the village to work in textile mills, where they earn supplemental income for their families.

When ODAM first entered the village and realized that girls were not permitted to leave even to pursue higher education, they took it is as a challenge to try to change people’s minds. Their field coordinator and village facilitator arranged to send eligible girls to college, and they worked hard to change attitudes about women in the village. Finally, one family whose daughter graduated high school came forward. The student, Uthira, was admitted to a college in another village last year

After Uthira enrolled, she helped motivate other girls to attend college by speaking in ODAM’s adolescent group meetings. By June 2018, two other girls were sent to nursing college and another girl from the village enrolled in an Arts and Science college outside the village.

ODAM’s staff is proud that they were able to change the community’s beliefs and successfully send the girls to university. We hope that more girls from the village will pursue higher education in the future.

In the poorer communities of southern India, the textile industry provides vital jobs and incomes. However, instances of bonded labour and other abuses are often found within the industry, especially among adolescent girls. The Freedom Fund’s southern India hotspot helps reduce bonded labour in textiles, with a focus on women working in spinning mills and garment factories.