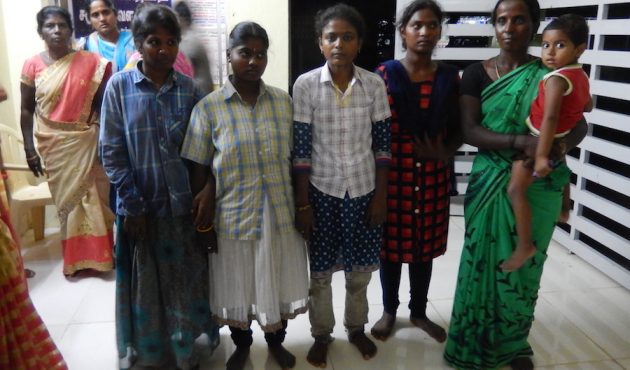 “Earlier if we raised any issues with the management they would say that if you don’t like it, you can go now. But now it’s us who say that if they don’t resolve our issue, we all won’t work.”

During a recent visit to Tamil Nadu, I spent time with one of the textile workers’ groups supported by our partner, Peace Trust. We found that this workers group was inspired by the changes that collective action had achieved in their village in the past few years: Now they are using the same methods to bring change in the spinning mills where they work.

With the backing of a Community Support Group in their village, the local textile workers set up a workers support group for female workers employed at several nearby mills. The group meets every few weeks to discuss the issues they face at their workplace and collectively decide on steps they can take. The group is now able to help dozens of other workers at each mill to speak up about their issues. They find that a few well-informed workers can organise a much bigger group inside each mill.

The oldest woman in the group, Ms Kaliyammal, is 32 years old and she has been working in spinning mills since she was in her teens. She explained that going together to speak with management is making a difference. For example, they used to have to work 12-hour shifts each day, but now they work for eight hours, and the daily wage has shifted from Rs.180 ($2.50) to Rs.250-320 per day ($3.50-$4.50). It’s still much less than the legal minimum wage for an apprentice in the spinning mills, but it’s an improvement. In addition, workers used to only get 20 minutes to eat their lunch, but after collectively addressing the management at her mill, now they get a longer lunch break. Their latest focus is to ask mill management to provide lunch for workers, rather than bringing their own. Finally, the supervisors used to verbally abuse the female workers for not producing enough, but now that’s stopped. These changes are making a huge difference in their lives.

The worker group has also witnessed important changes achieved by the village Community Support Group (CSG) using collective action. The CSG includes male and female leaders in the community and has been active since 2015. The CSG protested to the Member of the Legislative Assembly about the long walk children in the village had to endure each day to reach the local high school, and as a result, they have now secured a vehicle to take the children safely to school. Likewise, the water well in the village was old and had become a hazard for small children, so they secured it properly to ensure children’s safety. The CSG was able to arrange for the provision of toilets for most of the households to improve sanitation and reduce health risks.

Safety and preventing exploitation of girls and young women remain at the centre of the efforts of these village groups, with adolescent boys becoming active too. One boy explained how he is more confident now to call out any boys that he found harassing local girls.

By contrast, we also visited communities that are right at the start of building their collective power. Ramanadapuram is a District where many adolescents and young women are recruited to leave the area and live and work inside the textile mills in other parts of the state. In 2019, the Freedom Fund started supporting work in 50 villages in the district through two partner organisations.

In a schoolroom in one of these new villages supported by our partner TRRM, the 8th-grade girls raised their hands to say that they plan to enrol in 9th grade, despite the difficulty of getting to the school without a proper road or bus. One of the girls was proudly celebrated as she’s the first in her village to already make it into the 9th grade – it was a huge achievement.

But one girl had not put up her hand. Paramu (name changed) doubted that she’d go to 9th grade. She wasn’t sure if her parents would be able to let her stop working at the spinning mill. We found out that she has been living at a mill hostel and had been sent back from working at the mill for a brief home visit because, now aged 13, her menstrual cycle had started. She had been sent to the mill at age 11. She explained that she earns Rs.200 ($2.80) per day and works 6 am to 5 pm six days per week. It was clearly painful for her to think about the plans of the other girls, so we moved the discussion on. Several of the other adolescent girls explained that they have siblings who’ve gone off to live at a mill hostel, and 20 out of 30 of these workers from their village are under 18 years old. Clearly, the work that has now begun is urgently needed.

Pictured: Members of the workers group in Tamil Nadu