Community groups win a platform for change in Tamil Nadu 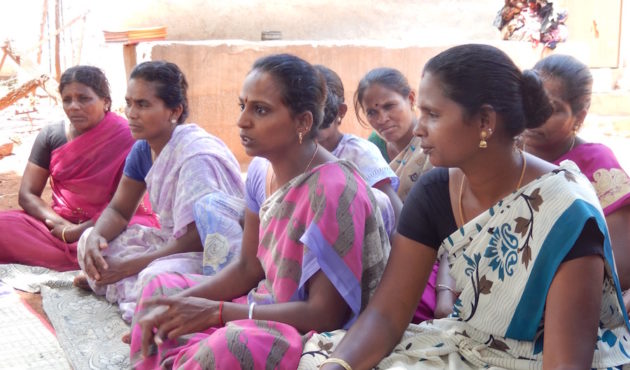 This article was originally posted by the Laudes Foundation on 16 March 2020.

Of these elected officials, 151 are members of Community Support Groups (CSGs), established in 2015 to reach deep into rural communities that rely on spinning mills for employment. The CSGs have given workers a platform from which to create pressure for better conditions – and, importantly, to better understand their rights and the responsibilities of their employers.

Now, with so many CSG members winning local seats – and 68 percent of them women – there’s hope they can use their new positions to further influence the mills and address other pressing issues like the poor state of local schools and the mistreatment of migrant communities.

CSGs are part of a hotspot programme coordinated by Freedom Fund in partnership with Laudes Foundation and UBS Optimus Foundation. There are over 430 CSGs in Tamil Nadu, each of which is run by local workers with support from a network of 15 grassroots NGOs.

Ginny Baumann, Senior Programme Manager at Freedom Fund, said: “Spinning mills are often the main employer in these villages and a vital source of income for families, but too frequently we hear of the shocking conditions workers have to endure. Many people working in the mills are adolescent girls who should still be in school and are particularly vulnerable to exploitation.

“These newly elected officials understand the issues first-hand. They have been working for better conditions in the CSGs and now they can go into the mills and speak directly to the owners.”

One recently elected official is 27-year-old Vennila from the historically marginalised dalit Arunthathiyar community. She was trapped in a bonded labour scheme for three-and-a-half years and forced to work 12-hour days while being kept away from family and friends. Malnourished and with deteriorating health, she finally left the mill having earned just Rs 38,000 ($542).

After attending an awareness meeting held by Freedom Fund partner CARE, Vennila started working as a Field Coordinator, despite her poor health. She is the first dalit woman to contest her village elections and won with the support of her local community.

Now, she says she is aiming to “prevent adolescent girls entering into bonded labour; create access to short-term courses for girls who could not continue college education; create village-based textile social enterprises; and find guides, emerging leaders and mentors to give advice – tackling all these hurdles.”

Freedom Fund’s Programme Coordinators say community members will also benefit from easier access to social protection and security schemes as the newly elected officials will pro-actively make these systems work in their villages.

Ipshita Sinha, Labour Rights Programme Manager at Laudes Foundation, hailed Vennila’s victory and that of all the elected CSG members as a “victory for workers’ rights and grassroot self-governance” adding that “the emergence of women leaders from the communities is a big leap for the movement in Tamil Nadu”.

“Laudes Foundation is responding to the dual crises of inequality and climate change by supporting brave, innovative efforts that inspire and challenge industry to harness its power for good. The emergence of leaders from within historically marginalised communities is a powerful example of how we can challenge established norms in the fashion industry from the ground up.”

Pictured: A community support group organised by Child Voice, one of the Freedom Fund’s NGO partners in Tamil Nadu, India.