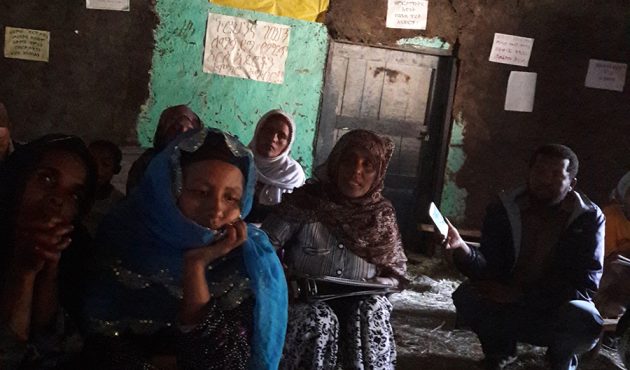 Two days ago, I was in a small village 30 kilometres from Dessie in the northern region of Amhara in Ethiopia. I was visiting a group of women that our partner, Mahibere Hiwot for Social Development (MSD), has helped establish as a peer discussion group on safe migration. They met in a simple clay house made available by the village elders to discuss how to make migration safer for the community’s women. In this village, like many others around it, all families have at least one female member who migrated to the Middle East to work as a domestic worker. Here, attempting to leave one’s community to find employment opportunities is never in question; it is the norm.  Despite this, prospective migrants know very little about what needs to be done to keep themselves safe.

During these discussion group meetings, about 30 women get together each week for an hour for a conversation led by a community facilitator trained by MSD. On the day I visited, about 20 women attended. Seven of them were returnees, and almost all of them said they wanted to travel again. Those who hadn’t yet left expressed an interest in migrating in the future. Economic opportunities are just too scarce for the women to remain in their village, they reported.

I asked them what they thought they could do to protect themselves as they planned for their journey abroad. They told me, “We need to learn the skills to cook and clean, a bit of the Arabic language, how to dress, how to keep important documents like our passports, how to ask for our pay and to have some time to rest”.

Another said, “We need to know which country we are going to and what’s in our contract, before we go. Compared to Filipinos, we are so badly treated”.

One returnee told me, “For three years I was abused so many times in Dubai because I just did not know about ways to do things there”.

Finally, another woman made it clear that they cannot do it alone. They need their government to advocate on their behalf and protect them abroad.

This was the fifth time the group met to discuss what they need to do before migrating, and whether it was necessary for them to do so. Until then, many women from that community and many more had moved abroad without having had the chance to discuss their options, learn from the experience of others and prepare themselves to go.

Much remains to be done, and until Ethiopia’s migration ban is lifted, their situation remains precarious and opaque. But the women are slowly gaining the confidence they need to ask brokers operating in their communities the right questions, discuss as a family what their options are and make sure that the youngest amongst them delay their migration abroad.

This peer discussion group, like many more we are supporting across Amhara, represents a good start in supporting women to take the necessary steps to stay safe as they migrate and work in the Middle East.