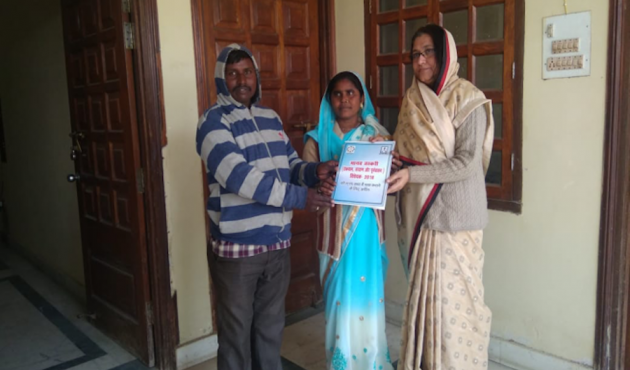 In the state of Uttar Pradesh in northern India, bonded labour is intertwined with the caste system, which reinforces discriminating practices. Interventions like those of our partner MSEMVS, which are led by community members to drive socio-cultural transformation, can deliver sustainable change.

MSEMVS works with the Musahar communities that are treated as “untouchable.” They face discrimination at all levels. Forced by custom to serve the influential castes, any attempt to improve their socio-economic condition has been strongly and often violently resisted by local elites.

Musahar children face acute discrimination in school due to caste. For example, some of the children have unconventional names, because parents may have heard a word but didn’t understand the meaning, and used it to name their children. These names make the children objects of mockery in the classroom. Despite the right to education, discrimination, segregation and ridicule keep the children away from schools.

The sense of inferiority has been constantly reinforced across generations by unjust demands. Influential castes demand the Musahar’s service (often unpaid) at social events to clean up the leftover food after the guests have eaten. Their children’s education is disrupted by demands that they attend to urgent work for the influential castes. MSEMVS addresses this socially-rooted discrimination by empowering survivors of bonded labour and community members to combat discrimination collectively. The inter-village collective known as the “Azad Shakti Abhiyan” (or Strong Campaign for Freedom) started off by prioritising their children’s dignity, hygiene and education.

Prioritising hygiene not only improved the health of the community but also the public perception of them. New uniforms provided by MSEMVS made it possible for their children to attend classes without being ridiculed. The collective also guided parents to change the odd names of their children to more conventional ones to help the children gain acceptance.

Mentored by MSEMVS, Azad Shakti Abhiyan collectivised resistance to discrimination and built the community’s legitimate power against unjust demands. In many places, the influential castes have gradually given up trying to force compliance from these communities. Over time, there are also positive signs of inclusion: many of the community members are now invited as guests to social functions including those of the influential groups, and they are treated as equals.

MSEMVS’ support to the community has helped them reclaim their dignity, their children no longer have a sense of inferiority, and are motivated to learn and live as equals.

Pictured: Azad Shakti Abhiyan meets a District Chairperson of one of the political parties to discuss support for bonded labour survivors.