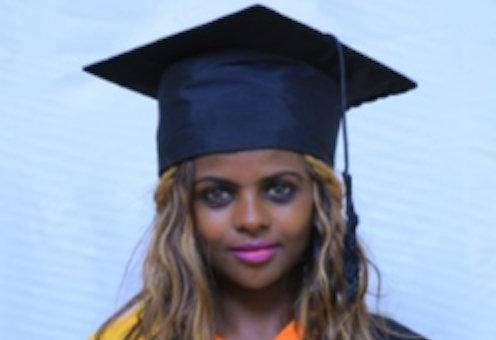 The Freedom Fund’s Ethiopia hotspot Ethiopia hotspot partner focuses on promoting safe migration among young women seeking to travel to the Middle East for domestic work. The program complements existing efforts to reduce the vulnerability of potential migrants and returnee women and girls to trafficking.

Our Ethiopia-based partner, Bethsaida Restoration Development Association (BRDA), works to raise awareness of safer migration among commercial sex workers and provides vocational training for women interested in pursuing a new area of employment within Ethiopia. BRDA has shared the following account of a project participant who graduated from their vocational training program.

Eskedar is from the Amhara region of Ethiopia, which is located north of the capital, Addis Ababa. Growing up, Eskedar’s mother was a housewife and her father was a day labourer. The family encountered difficulties securing enough income to feed their household, and as Eskedar was the oldest, it was decided that she would leave Amhara and move to Addis Ababa to live with her aunt.

When going to Addis Ababa, Eskedar expected to have access to more opportunities which would lead to a better future, but upon arriving she was treated as a housemaid and struggled to access basic needs. She then decided to live with friends, who advised her to join them in their work, where she could earn money quickly.

Eskedar did not understand what commercial sex work was nor some of the challenges associated with this line of work. During this time, Eskedar noted, “Although I realized the negative repercussions of the business, I didn’t have any alternative options to support myself.” She was able to leave commercial sex work when a customer began supporting all her living expenses. Concerned about being dependent on this one individual, Eskedar began to consider migrating to the Middle East for work.

Hearing from a friend about BRDA’s training program, Eskedar enrolled in and graduated from the centre upon completing a course in hairdressing. Due to some physical challenges, Eskedar opted to open a clothing shop with seed money provided by the BRDA project and retail space provided by the government.