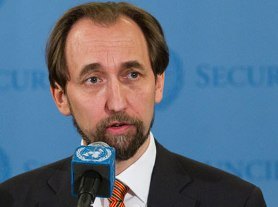 Jordanian Prince Zeid Ra’ad Zeid al-Hussein, the new U.N. High Commissioner for Human Rights, delivered his inaugural speech before the U.N. Human Rights Council this week. He didn’t pull any punches in the speech, in which he expressed his desire to “strengthen the human rights pillar of the United Nations system” and the Office of the High Commissioner of Human Rights’ (OHCR) “numerous concerns” about threats to human rights concerns. He said:

“I solemnly remind this Council that widespread or systematic attacks on segments of the civilian population because of their ethnic background or religious beliefs constitute a crime against humanity, for which those responsible must be held accountable.”

Mr Al Hussein noted that the human rights situation of migrants has been an area of particular concern for the OHCR, saying:

“We continue to see countless avoidable deaths of migrants in the course of their journeys; brutal forms of human trafficking; ill-treatment at borders; and prolonged detention in deplorable conditions. Many migrants, including documented migrants, also suffer forced labour or dangerous, exploitative or degrading working conditions, and these violations against migrants are frequently characterised by the victim’s inability to gain redress from State officials.”