Freedom Fund responds to extreme flooding in India and Nepal 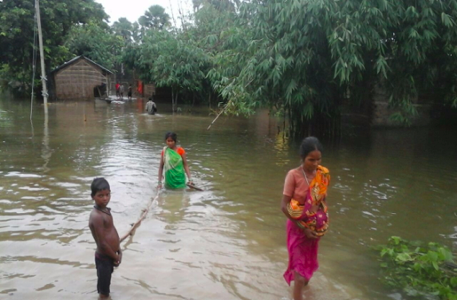 Our hearts go out to the millions of people in South Asia suffering from the extreme flooding caused by heavy monsoon rains across Nepal, India and Bangladesh.

32 million people in India and 1.7 million people in Nepal have been affected by flooding and landslides caused by torrential monsoon rains in recent weeks. Our working areas in south-eastern Nepal and Bihar in northern India are among the areas most severely affected. Rescues of stranded people continue by helicopter and 1,346 flood relief camps have been set up in Bihar.  The governments of India and Nepal are mobilising considerable food relief, but some areas are unreachable by road. As well as causing loss of many lives and devastation of property, cattle and livestock, the flooding will result in increased vulnerability to slavery for families in these areas.

The Freedom Fund has released an additional $20,000 to each hotspot to assist in our partners’ working areas, and we are supporting partners to focus on these immediate needs.  In areas not yet reached by the government, we have provided funds for food, shelter and cooking supplies.

In south-eastern Nepal, our partners have been helping officials with health camps and the distribution of supplies, including making sure that relief reaches the Harwa-Charuwa communities.

In the coming months we’ll be helping partners adjust their plans and assist families who have lost their assets and who might be at risk of further debt bondage or child trafficking as a result.

Pictured: This photo was taken by Freedom Fund partner FSS in northern Bihar. FSS is helping 400 families with emergency supplies.