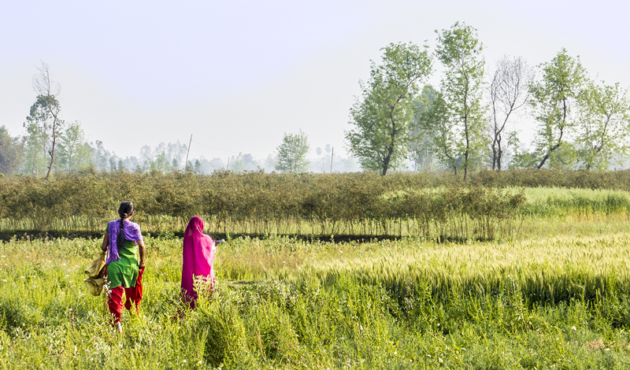 I recently returned from Nepal where I met with leaders and civil society organisations (CSOs), and heard what freedom means to people from the Harawa Charawa community in Madhesh Province. Nepal’s Prime Minister announced their emancipation earlier this year. I reflect on what I saw, and share what survivors said about how they feel about the long road ahead to liberation.

The Terai is beautiful, flat, fertile land in the southeast of Nepal. Its streets are a mix of recently paved, tarred or dug-up roads and never-paved pathways, including dried riverbeds. People who live here commute on motorbikes or in buses. Those who visit take hardy jeeps that can navigate the varied terrain.

It took us the better part of a day to reach the Terai from Kathmandu. Despite it being a short flight to Janakpur and only few hours’ drive to Lahan, travel times are often unpredictable. The flights are subject to weather and other vagaries, and the traffic varies. Every community we visited, people live at least a couple of dusty kilometres from any paved road.

Families that belong to the approximately 100,000 people who make up the Harawa Charawa community in Madhesh Province of Nepal are often illiterate with only the very young getting a few years of basic schooling. Their homes are made of mud, they own no land and they have no savings. Many do not have birth certificates or citizenship documents. Facilities such as support for schooling, housing, work – all these are available only if mediated through local CSOs. Even for the young, there are almost no alternative pathways to make a living, and many continue to do as their parents did – work for the landlords, tilling the land and grazing their goats and cattle.  Hence the name Harawa (the user of the plough) Charawa (the person who grazes cattle).

Yet it is not the poverty that communities, leaders and CSOs return to time and again in our conversations. “No child of mine will ever again touch the feet of the landlord,” said one person, sitting on his haunches, holding his hands out as if they were handcuffed. A woman with a child on her lap spoke at length saying only one thing, again and again – my life is over, but my children must not go through what I have. She couldn’t be more than 25 years old.

What they’re referring to is the system of untouchability that South Asia tries so hard to deny and that continues to be such a strong part of the social fabric. The Harawa Charawa experience discrimination, invisibility and a lack of dignity every day. There are only a few who have been able to break free, educate themselves and be part of the formal work force.

Caste names in the Terai often carry demeaning connotations – to some, Harawa Charawa indicates that someone is good for nothing except dull work like grazing cattle, or that someone is untouchable – useful, but untouchable. In one case, we met a person fighting to stay on land where his hut has stood for over ten years. The court has ordered him off the land, but the village wants him to stay there. If he is forced to vacate, he’ll have to be allocated land to live on elsewhere, maybe closer to the village. And many in the village may not consider it acceptable to have untouchables move closer.

Despite the odds stacked against them, the Harawa Charawa are not passive onlookers in the social fabric in the Terai.  All of them know one important date –  July 18, 2022,  the second day in the month of Shravan, according to the Hindu calendar. The day that the Prime Minister of Nepal announced that the Harawa Charawa were finally free. Interestingly, on this same date 22 years ago, another group of agricultural bonded labours in Nepal, the Kamaiya, was also declared free. As for the Harawa Charawa, no rehabilitation package has been announced yet, but the community has met often and is prepared to share its recommendations when invited to the discussion.

This effort is led by the Harawa Charawa Network and CSOs that have been working to support the Harawa Charawa for several years. The Network emerged out of hundreds of community groups that CSOs, supported by the Freedom Fund, had facilitated. It is now a group of bonded labour survivors representing the needs of their communities and advocating to end bonded labour. Starting as a loose group of community activists, it has developed into an organised network with elected representatives across all eight districts of the Terai, as well as a national-level committee focusing on what next steps should be in the journey towards liberation. The elected representatives now must be trained on how they can continue to advocate for their communities. It is a vibrant, thoughtful, resilient group of people.

In one village near Lahan, the women expressed themselves clearly regarding the declaration of freedom from the government. “We are happy. Would we not be happy? But do we have land? Do we have houses? Do our children go to school? No. Until then, how can we be really free?”

The last declaration of freedom of agricultural bonded labourers in Nepal was 14 years ago, when the Haliya were declared free. It has taken all this time for the Harawa Charawa to be recognised and liberated. This happened in no small part because they mobilised, collectivised, and honed their negotiation skills. In this they have been supported by a civil society that continues to work for the community at the local and provincial level. It will be another undertaking from here to meaningful freedom – education, livelihood, dignity. It is a journey we simply must support.