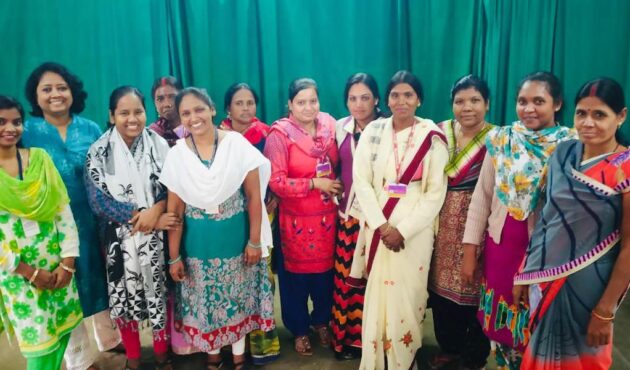 A few years ago, I was visiting a community in Bihar, India, and sat in on a meeting of a women’s self-help group – a group of about 15 women who were pooling their savings and providing credit to each other for their small businesses.

There was a man sitting close to the group, just outside their circle, and I noticed he kept jumping in to respond whenever I asked a question. I found it odd and asked if he was part of the group. “These women are illiterate, so I help them in maintaining accounts,” he said.

This kind of attitude won’t be a surprise to anyone who has visited rural communities in India, or indeed in many countries of the world. It is true that education levels are lower among women, because of the backward gender norms that push girls to drop out of school much earlier than boys. But these attitudes often persist even when there is no basis for them. The women in this self-help group were perfectly capable of managing the funds themselves, but this man insisted on interjecting himself into their business because of his own prejudice.

Not long after that experience, I was in another meeting, this time with the staff of one of our partner NGOs – a grantee of the Freedom Fund – and I noticed that despite women being the majority in the room, the entire conversation was dominated by a couple of male members of the team. It reminded me of my experience with the self-help group, and got me thinking about how the same discriminating attitudes towards women could prevail in community based organisations if not effectively countered. After all, female NGO staff come from a similar background of deep-rooted patriarchal practices. Sometimes their own broken identity and baggage of low self-esteem, shame and regret add to the problem.

This thought inspired me to start holding meetings that were reserved exclusively for the female staff of our 11 partner organisations. During these sessions, many small matters came to the forefront, which were clearly affecting the mental well-being and decision-making of the women. They talked of the stress of working while also being expected to manage the household and childcare. Others talked about being excluded by their husbands from decisions about how to spend their own hard-earned salary. One woman described how she faced daily verbal abuse on her way to work. After the meeting, she came up to me and said: “I am feeling so much lighter that I was able to share my stress openly.”

We would start the meetings with introductions, and I often asked participants to share their favourite facet of their personality as they introduced themselves. I was encouraged to see many participants talking about their hobbies or passions – singing, travelling, dancing – which maybe they had forgotten after they got busy balancing a job and their duties at home. As they talked of these old passions, their facial expressions were priceless. One participant who sang for the first time after many years exclaimed, “The applause from the group reassures me that the singer in me is still alive!”

After one of the sessions, a group of women from one organisation found the courage to confront a male colleague who used to make crude jokes and share offensive songs in the office. Whereas before they just tried to ignore him, now they were asserting themselves. Ultimately, the NGO fired him when he refused to change his behaviour.

The pandemic has brought a new set of challenges. During the lockdown, I invited female staff to a virtual meeting to see how they were coping. It was like a steam valve had been released – they shared story after story of struggle. Many complained about the double standards in how much household work they were expected to do at home, including looking after the children whose schools were closed, compared with their male colleagues who were expected to do much less. After the meeting participants asked to meet regularly through lockdown, so they could see how others were coping with the situation and, in the words of one woman, to “provide an outlet for our frustrations”.

Sometimes it is just the talking and the sharing that helps women gain the confidence to speak and act for their rights and their dignity. If we want to empower women and girls in communities, we first need to ensure that our grassroots mobilisers, the women working for NGOs, are empowered too. Our NGO partners are taking active steps to address this, but they acknowledge it is a work in progress. As a donor, we have a role to play in accelerating change. I am incredibly excited by a new program that the Freedom Fund is launching in December called Freedom Rising, which will help emerging women leaders from rural regions to recognise their self-worth and live to their full potential. And internally at the Freedom Fund, we must also set an example, and that is why we are looking at our own diversity, equity and inclusion, and identifying ways that we can improve.

There is a long way to go, but if we recognise the challenge at every level of our work, and make space to address it, we can make progress. I am optimistic that we will see the rise of many more women leaders in the coming years.

Find out more about Freedom Rising

Neeta Minz is a Freedom Fund program advisor for the northern India hotspot.