Why the Harvard study matters 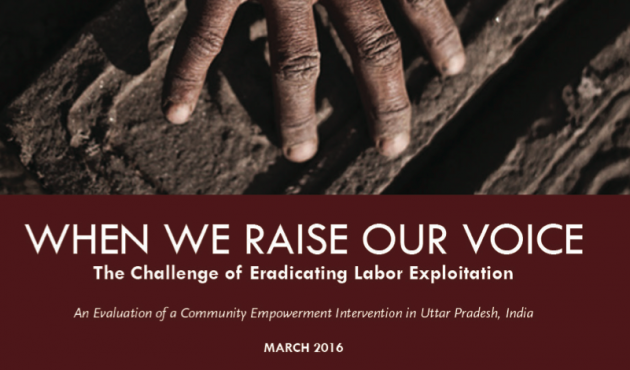 Yesterday, Harvard University’s FXB Center for Health and Human Rights published a landmark study for the anti-slavery field. The study focuses on one of the Freedom Fund’s Indian partners, Manav Sansadhan Evam Mahila Vikas Sansthan, or MSEMVS, and its community-based approach to eradicating slavery.

Why is it a landmark? First, because of what it found: MSEMVS’s model appears to have had an enormous impact on communities previously living in bonded labour. As our separate announcement today describes, 33 villages in the state of Uttar Pradesh involved in the study reported reduced household debt, increased savings, higher incomes, greater access to medical care and government employment schemes, and that they were eating more meals than comparison areas in the study.

That is an astounding result. Or perhaps astounding is the wrong word. For me and my colleagues at the Freedom Fund who have visited some of these communities over the past two years, MSEMVS’ model has always seemed to be making a tangible difference. But it is exciting to see such strong results emerge from a rigorous study by an independent institution like the FXB Center.

For all of us in the business of identifying development models that work and seeking to scale these up, the study is a strong signal that we should be paying close attention to what MSEMVS is doing. Their approach of taking things slowly, building trust in marginalised communities, and gradually fostering both a psychological transition and a practical, economic one seems to be bearing fruit. (Click here for more on the MSEMVS approach).

In 2014, when we devised the Freedom Fund’s evaluation strategy, we deliberately set out to commission more academic studies of anti-slavery interventions, because we recognised that our contribution to the sector would be many times larger if we could generate data and knowledge that were useable by other organisations, rather than focusing only on the direct results of our grantees. It’s no accident that FXB’s study is the first independent attempt to assess the impact of this type of program. There just haven’t been many studies of what works in the anti-slavery field, and that’s why the sector has lacked the evidence about what to invest in.

So in addition to FXB’s positive findings, the fact that this study has been published at all is something to be celebrated.

Our intention is to take these results and further analyse the economic costs involved in achieving them so as to have a measure of the cost-benefit of the model. We are also planning to work with MSEMVS to document and share its methods and insights with other frontline organisations.

Our broader aim remains to identify and promote the models that hold the most promise in the fight to end modern slavery. We look forward to working with others to support more research in this direction.