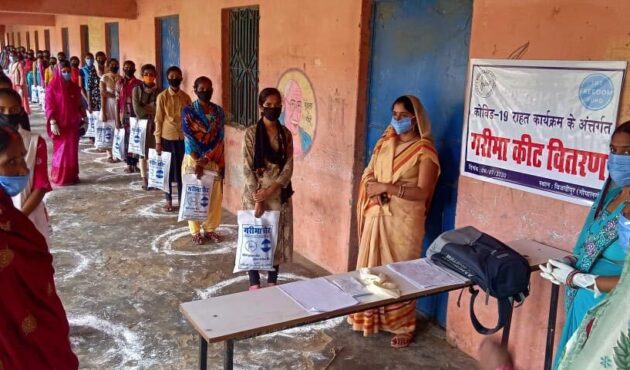 On 24 March, the Indian government ordered a nation-wide lockdown in response to the global covid-19 pandemic, restricting the movement of 1.3 billion citizens. Within days, the country witnessed an unprecedented exodus of migrant workers into the streets, many of them without food or money, trying to return to their villages after the sudden closing of their factories and workplaces. This crisis affected not only the migrant community but caused havoc across the country. The loss of income, closure of schools and disruption of health services was particularly devastating to the most deprived and marginalised communities.

The government acted quickly to put in place a package of emergency support measures to ease the crisis, especially in the six states that received the majority of the returning migrant workers. Just two of these states, Uttar Pradesh and Bihar, received nearly 50% of the workers (estimated to be about 4.1 million people). The government provided low-income families with monthly cash transfers of 500 rupees per month (about $7), an additional 5kg of rice in their monthly food rations and enhanced employment schemes for returning migrant workers.

These were very positive steps, but there remained a major challenge – ensuring that marginalised populations could actually access these support measures. Uttar Pradesh and Bihar are two of India’s poorest states, and have some of the highest levels of exclusion in the country – communities left behind because of caste discrimination, class hierarchy and uneven resource allocation. In normal times, the Indian government has welfare programs that on paper should be reaching the most vulnerable people, but in reality they often fall short because the people cannot access them. This was a big risk for the covid response as well.

The Freedom Fund has a longstanding program in Uttar Pradesh and Bihar, supporting 11 grassroots civil society organisations working to help vulnerable communities access their rights. While the government’s covid response was positive, our concern in these two states was that the support measures would not reach those who needed them most. For example, for people to access the government cash payments, they needed to have bank accounts. Many did have accounts – set up in 2014 after a government drive to give accounts to every citizen – but because financial literacy is low, they had let the accounts become dormant and now could not access them without filing a request in person at the bank, which was often far away. Others lacked the necessary ID card to benefit from the employment scheme.

Through support from our covid-19 Emergency Response Fund, our grassroots partners, working in a coalition called the Human Liberty Network (HLN), devised a comprehensive strategy to address these problems. Many of the most vulnerable communities were not aware of the government schemes, so the HLN members provided information to thousands of families about what support was available and how to access it. Most of the migrants who had returned to their villages didn’t have employment cards, so HLN worked with local government departments to ensure that migrants received the cards after they were released from quarantine centres (which they were required to stay in on arrival in the state). HLN also coordinated with banks and helped community members to open or activate bank accounts so they could access the direct cash transfers from the government.

One of the key challenges was that officials were not aware of the conditions in the most remote communities. HLN published an assessment of the situation in these villages, which received significant media coverage and was also shared with state and district officials, which helped to build momentum within government to ensure all these communities received support.

The result of these efforts was much greater uptake of the government support measures. HLN helped 125,000 individuals access government support in the space of just a few months between April and June. Even more encouraging is that 60,000 of these people had not previously registered for government entitlements, and they will now be able to benefit from government support even beyond the pandemic. For example, many children who would have been eligible for scholarship payments because they are from low income families but had not been getting payments because they lacked active bank accounts, will now be able to receive these funds on an ongoing basis.

The Freedom Fund and the Human Liberty Network are continuing their work with local, district and state governments to ensure that what has been learned during the pandemic can be applied in the future, not only in the areas where the HLN is present but across Uttar Pradesh and Bihar. This is a small silver lining in what has been a most difficult year for everyone.