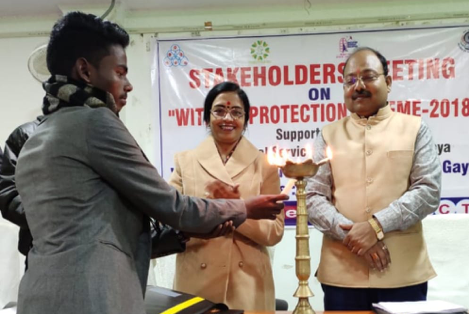 Survivors of trafficking from one of the highly-affected districts of India have been struggling to access justice because of threats and kidnapping by traffickers. Traffickers often demand that they change their testimony in court. Now the Witness Protection Standing Committee in Gaya District is stepping up action to protect children and their families who face these threats.

On 11 January, the Gaya District Witness Protection Standing Committee held the first-ever stakeholders meeting, arranged with support from Freedom Fund partner Centre DIRECT.  The meeting was organised in order to share the main features of the new Witness Protection Scheme for survivors of human trafficking.

The opening lamp lighting was led by survivor leader, Ashish Kumar, whose determined pursuit of justice against his trafficker has led to a landmark legal victory.  In his case in 2019, the Jaipur court awarded the first-ever life imprisonment of a trafficker for exploiting child labour.

Ashish Kumar emphasised the crucial role of witness protection, explaining how he was threatened with dire consequences if he appeared before the court to give witness against the trafficker.

When he persisted with his plan to give accurate testimony, the traffickers kidnapped him and his mother, and once alerted by Centre DIRECT, the police took swift action to rescue them from the train, 120 km away from home.

At the stakeholders meeting, there were 50 police officers, 20 judicial officers, two senior judges and several survivors of child trafficking, among others. Survivors, Centre DIRECT and Freedom Fund Program Advisor Abhijit De shared many examples of threats and intimidation against witnesses, calling for proactive security measures.  The outcomes included: