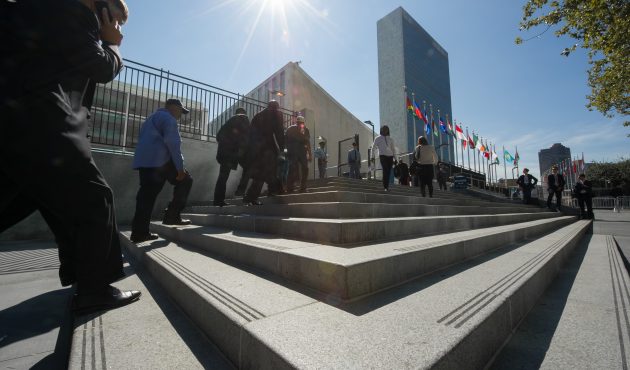 I was in New York last week for the UN General Assembly. At this time of year, foreign dignitaries descend on the city, along with business leaders, non-profit leaders and activists. Amidst the host of events on topics ranging from the Sustainable Development Goals to migration, there was a strong focus on modern slavery.

Business in particular appears to be taking a much higher profile role on slavery and forced labour. I participated in well attended events hosted by the World Economic Forum on “advancing the fight against modern slavery”, Richard Branson’s B Team on “the business case for eradicating modern slavery”, and Walmart and Concordia on “how to accelerate and scale effective collaboration to combat forced labor in global supply chains”.

This attention is welcome, and a marked change from five years ago, when it was unusual to see multinational businesses talking publicly about issues of forced labour in their supply chains – let alone at the senior management level.

But, for the most part, these commitments have not yet translated into real change on the ground. Why is this?

For a start, we need to look at who is being exploited. The victims of these abuses are often migrants, ethnic or religious minorities, members of lower castes, women and girls – in short, they are nearly always treated as second-class citizens in their societies. Their voices are not heeded by those in power.

On the other hand, those doing the exploiting wield substantial power. They are the factory owners, the landowners, the ship captains – virtually always men – who are highly protective of their ability to extract maximum profit from those working in their supply chains, even when it is produced by forced labour.  And while many governments and businesses have the best of intentions when it comes to tackling slavery, they often don’t have the incentive to make the tough decisions required to drive genuine change when confronted by the forces opposed to change.

I explore these issues at further length in this oped on why “Business needs to work with frontline organisations to end forced labour in supply chains”.

The Freedom Fund is committed to ensuring the voices of vulnerable communities are heard and heeded by those who benefit from, or enable, their exploitation.  We already partner with, and fund, some 100 frontline organisations in countries with a high prevalence of slavery. But more needs to be done.

That is why, in the coming years, we plan to focus even more intently on supporting frontline organisations and empowering the movement of frontline leaders that we need to drive change. We want to ensure there is a much larger cohort of frontline leaders to lead the fight against slavery and forced labour. Working with local partners we plan to set up leadership academies in the high-prevalence countries in which we operate, to invest in and support civil society champions – and particularly women leaders – and to link these networks to help build the global movement. You can find more on our website here.

That’s our big ambition, but it will only succeed if we all work together to create a much stronger global environment. It will require business and governments to live up to commitments made in New York and elsewhere. And it will require more urgency from all of us in the anti-slavery space.