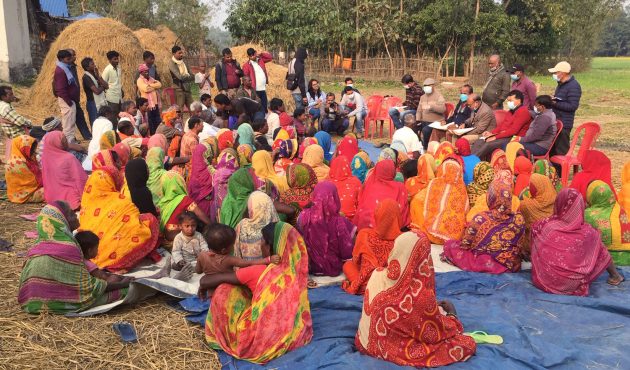 For the first time, the federal Government of Nepal has recognized a widespread system of agricultural bonded labour, known as Harawa-Charawa. In a landmark shift acknowledging issue, the Ministry of Land Management launched a task force to conduct a study of Harawa-Charawa bonded labour with the stated purpose of formulating policies to meet the needs of the communities.

On 9 February 2022, the federal Minister of Land Management, Cooperatives and Poverty Alleviation, Sashi Shrestha, made a high-profile appearance joining the task force in the Siraha district of Nepal for community consultations. This comes in part as a result of the powerful advocacy work that the Freedom Fund team and our partners have been doing with government at local and national levels.

The Harawa-Charawa take on high-interest debt when faced with a financial crisis. Once in debt, they are forced to work on their lenders’ land as tillers, cattle herders or domestic servants under threats of demanding immediate and full repayment of the loan and expelling the workers from share-cropping, taking away their housing and exerting physical abuse Although the bonded labour prohibition act 2002 officially abolished the Harwa-Charawa system and the Constitution of Nepal in 2015 added different provisions for the inclusive society, the practice has continued with an estimated 97,000 adults and 13,000 children in forced labour (ILO 2013).

The Harawa-Charawa have experienced positive change in recent years. Efforts by our partner organisations, advocates and social activists have generated historic achievements, including the increased visibility of Harawa-Charawa bonded labour, expanded community mobilization, and unprecedented backing by the government leading up to this federal recognition.

While the Harawa-Charawa are not the only people in Nepal who have struggled with life in bonded labour, until recently their existence was barely acknowledged by policymakers. The visit of Minister Shrestha indicates that the federal government is finally recognising the issue and beginning to address it. The Freedom Fund hopes to build on this success in the coming months.