“Now our confidence comes from the inside…” 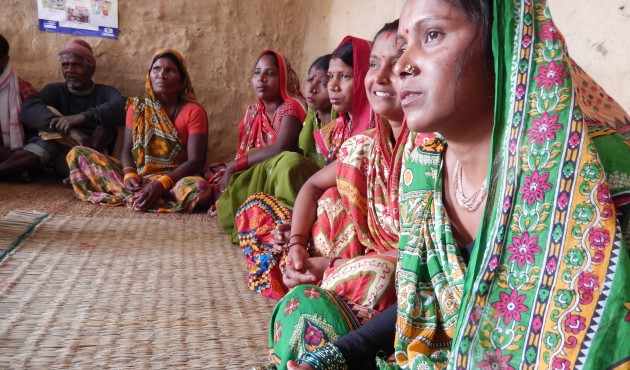 We were visiting local Freedom Fund partners working against agricultural debt bondage in our South-Eastern Nepal hotspot. Sitting in a small meeting room in one of the villages, we met with 7 men and 6 women, members of a community-based committee determined to bring their inter-generational slavery to an end. They described one of their recent achievements.

In this region, agricultural workers in debt bondage cannot work for another employer, and whenever their work is needed in the fields, they, and often the whole family, must be available. Most were born into this situation, and most have never known anything different. The families have almost no bargaining power with the landowners, ending up signing loan contracts that tie them into illegal interest rates as high as 60% per year – while also having to work for the same lender at less than subsistence wages. Because each family deals with the landowner on their own, they have no collective power.

But recently in this village in Siraha district, when the bonded labourers’ group was formed, with help from the Freedom Fund’s local partner DSAM, the workers were able to analyse what was happening to them, in a new way. They compared loans, interest rates and wages, and they called it discrimination. They decided that they needed to make a change.

It was harvest time, so the landowners were reliant on all the local workers being available every day. The bonded workers decided that this was the time to threaten not to work and to demand subsistence wages for their labour. All these families live hand to mouth on the rice provided by landowners in return for their labour, so their decision was risky. They could not hold out for long. Eight committee members went around house to house, building support. They said that if they couldn’t do this now, then their lives would never change. Around 250 workers from eight nearby villages joined with them in refusing to work.

Not only were they hungry, but in retaliation, the landowners threatened and scolded the workers, making them afraid to use the road leading out of the village and afraid to go out to graze their cattle or collect firewood. One of the group explained “We weren’t sure what the landlords would do and if they would hurt us, but we had courage. Whatever would happen would happen, but we had to raise our voices for our rights.”

The landowners were also feeling the pressure, worried about losing their crops, and after 5 days, a few landowners approached the chairperson of the group to negotiate a settlement. They agreed that for each day’s work they would provide 8 kilos of rice or NRs.300 per day, rather than only 5 – 6 kilos of rice.

Seeing this, other landowners did the same. Not only did the landowners pay more, but many conceded that instead of the 60% interest they would reduce it to 36% – still extortionate, but a huge change for the bonded families.

The group has a long way to go to remove themselves permanently from bonded labour. They’ve been joining in literacy classes organised by DSAM, where they’re learning to read and do basic arithmetic and combining this with information about their rights. They explained that they can write their name, do basic reading and simple calculations. They are also saving small amounts together each month, to increase their independence from the landowners.

One said “Now our confidence comes from the inside. We can talk in a meeting like this. We like to be learning.” They explained that when they were striking “we were frightened to see if the pay would be increased. When it was increased we felt happy. Our confidence was raised.”