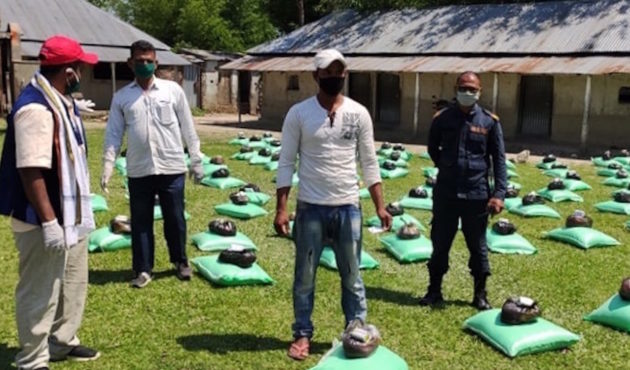 It has been just over a month since we launched our emergency fund to help respond to the impact of covid-19 on the most vulnerable communities. The reaction so far has been hugely encouraging. As of May 11th, we have received some $2m in commitments, exceeding our $1.5m target. Thank you to all those who have donated, in particular the Legatum Foundation, which made a catalytic $1m match funding pledge, as well as many others including the Cassiopeia Foundation, Laudes Foundation, Minderoo Foundation, Dorothea Haus Ross Foundation and UBS Optimus Foundation.

We continue to hear daily reports from our staff and grassroots NGO partners about the devastating effects, not only of the virus but of the resulting economic shutdown. Since we launched the fund, we have been working non-stop to identify the most pressing needs and to channel resources toward them as swiftly as possible. During the week of April 27th, we were able to distribute the first set of grant payments worth $530,000 to 61 NGOs in India, Nepal, Thailand, Myanmar and Ethiopia, serving an estimated 80,000 people directly. We will be disbursing a second round of grants very shortly. The need on the ground is enormous, and growing, as the economic ripple effects of lockdown spread.

In the first round of grants, we offered three categories of funding, based on the needs our partners had identified:

Not surprisingly, the greatest need at the outset of the crisis has been food for communities in lockdown. With no wages coming in, families that were already living hand to mouth are struggling to feed themselves. Governments have been doing what they can to provide emergency rations but many of the most vulnerable aren’t being reached. In remote south-eastern Nepal, for example, our partners are distributing vital supplies of rice, lentils, potatoes, oil, salt and soap to thousands of the most vulnerable families. Our NGO partners are coordinating with local government to ensure they are not duplicating efforts and have been given authorisation to move around during lockdown.

Advocacy capacity has also been critical. In Tamil Nadu, India, where tens of thousands of migrant workers from other parts of India are employed in the garment industry, the lockdown– and cancellation of purchase orders by Western fashion brands – has meant mass closures of factories and spinning mills. Some migrant workers are getting food through the hostels they stay at, and government rations have now reached some migrant settlements, but others are without any food supplies, lacking the residency proof that would automatically entitle them to government distributions.

Many of our NGO partners support savings and loans groups in communities affected by modern slavery. We have taken advantage of this ready network to provide cash transfers to those who need it most. To date, we have disbursed $215,000 to 611 community groups, all of whom have existing governance arrangements for managing funds, and we will expand this number in the next round.

The situation on the ground is evolving rapidly. Countries where the need was less severe in the early weeks of the crisis are now seeing that change. In Ethiopia, thousands of female domestic workers are returning home having been deported by Saudi Arabia, where the virus has reportedly stoked suspicion of foreigners. Our partner, Agar, which runs a shelter in Addis Ababa that provides psychosocial support to trafficking survivors, is creating a new temporary shelter for those coming back.

In Myanmar, the government has reported tens of thousands of migrant workers have returned home from China since March. Tens of thousands more are trying to cross the border from Thailand. These significant population flows are already putting a severe strain on local services. Looking ahead, it is clear that a huge number of families that have been relying on breadwinners sending wages from abroad are going to face a financial shock as these labourers lose their jobs. This is already being felt in many of the communities where our partners work.

Setting up an emergency response fund in little over three weeks has taken an immense organisation-wide effort. We wanted to ensure a streamlined, low-bureaucracy process for NGO applicants while keeping appropriate levels of oversight, and this required setting up several new systems from scratch. We also needed to ensure that any distribution of relief supplies was done in a way that maintained social distancing among community members.

As we look to allocate the next round of grants, we are incorporating the lessons we have learned from our partners so far to improve the impact of the grants. We are broadening the criteria for how money can be spent, for example, allowing expenditure on local partners’ staff time for a wider range of covid response-related activities, such as legal aid to migrant workers, or health messaging in communities. We are also incorporating additional best practices to strengthen accountability.

The fact that we had already completed exhaustive due diligence on our existing 100 NGO partners has enabled us to move much more swiftly than otherwise would have been possible, and this was a key reason why we believed the Freedom Fund was well placed to play a role in the emergency response. We have yet to provide funding to organisations that are not current Freedom Fund partners, but we are examining ways that this may be possible for future grants if we can carry out satisfactory due diligence.

There is no question that covid-19 and the economic crisis it has generated will lead to an increase in exploitation. More and more families are being pushed to the brink of survival, and will be forced to take ever more desperate decisions, high-interest loans and risky job offers. We see the emergency response fund as a short-term mechanism to help mitigate these effects over the next 3-4 months. But the impact of the virus will go on for much longer, and it will be critical for all organisations that work to combat slavery and exploitation to adjust their longer-term programs to this new reality. The Freedom Fund is determined to support its local partners and vulnerable communities both during the pandemic and in its aftermath, and we are taking steps to ensure that we are well placed to advance our mission over the coming 18 months and beyond.

On behalf of the Freedom Fund, thank you to all our partners on the ground for their incredible work and the risks they are taking in their mission, and thank you again to our donors for their vital support in making this work possible.