Reducing the risks for Ethiopian migrants to the Middle East 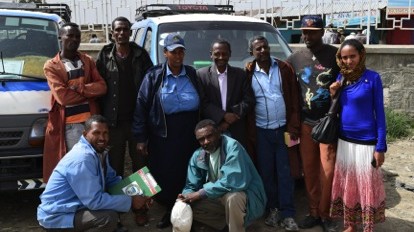 Much has been written in recent years about the atrocious treatment of migrant workers in parts of the Middle East. While some migrants are treated fairly, hundreds of thousands of Indians, Nepalese, Filippinos, and others who travel to the Middle East for work are routinely underpaid or denied their wages altogether, confined against their will, and in many cases, physically and sexually abused.

I recently visited Ethiopia, one of the countries with the largest number of migrants to the Middle East. The Ethiopian government estimates that at least 500,000 Ethiopians traveled there to look for work in 2012 alone. A large proportion of this outflow is made up of women and girls seeking jobs as domestic workers.

While some travel legally, the majority use illicit brokers and traffickers that smuggle them across borders. Nearly all face enormous risks. Many women and girls end up in desperate situations, including some who find themselves trapped in modern slavery. This is why the Freedom Fund is exploring how we can support Ethiopian efforts to stop human trafficking and reduce the risks for the most vulnerable migrants.

During our visit, a common story we heard from our Ethiopian colleagues is that young women are being lured out of their villages and towns by unscrupulous traffickers who make false promises about getting great jobs abroad only to sell the women off into domestic servitude or commercial sex work. In towns like Debre Birhan, on the road to Addis Ababa, Ethiopian officials and civil society organisations are increasingly on the lookout for young people coming in from rural areas on their way to the capital, which is among the many routes abroad.

Two women we spoke with who had recently returned from horrible experiences in the Middle East said that the biggest thing that was needed to prevent unsafe migration was information at busy transit points like bus stations to counter some of the lies spread by illegal recruiters, who loiter around bus stations looking for vulnerable targets.

The government is taking steps in this direction, having set up a National Anti-Trafficking Task Force under the Prime Minister’s Office which has launched a public information campaign and other prevention activities.

In Debre Birhan, the Emmanuel Development Association, an Ethiopian NGO, is working in partnership with the regional government, the police and local transport officials to monitor the bus station for trafficking victims and offer them support, including reuniting them with their families where appropriate.

But as a fascinating new report by the Nairobi-based Regional Mixed Migration Secretariat (RMMS) shows, there is more to migration than false promises from traffickers. The report, Blinded by Hope: Knowledge, Attitudes and Practices of Ethiopian Migrants, shows that misinformation from traffickers is one driver, but there is also a strong culture of migration in communities across Ethiopia and a broadly held positive perception about the rewards of working abroad. Many young Ethiopians are under pressure from their own families and communities to seek economic opportunities in the capital or outside Ethiopia.

There is also strikingly high knowledge among potential migrants of the risks they face. Over 80% of those interviewed were aware of the possibility of starvation, robbery, and degrading treatment abroad. Many said they were willing to tolerate such things in order to attain their migration goals. For example:

While Ethiopia has been one of the world’s fastest growing economies in recent years, growth has clearly not been sufficient to counter the perception that opportunities are greater in the Middle East. But is this perception matched by the experiences of those who have gone?

The findings from RMMS’s interviews with returnees are mixed. On the one hand, only 4% considered their migration experience successful, which is extremely low. And yet about a quarter try again, at high risk to themselves.

What explains this contradiction? Is it just false hope? Do migrants who have had bad experiences – and most of them appear to – just imagine they were unlucky the first time?

There is evidence to suggest that they are indeed blinded to at least some of the realities of migration. Only 1% of potential migrants say they would tolerate sexual abuse in order to work abroad. But numerous studies have shown sexual abuse of migrants is incredibly common. RMMS found that 1 in 2 migrants in Yemen had witnessed sexual abuse, including rape, or experienced it themselves.

A plausible explanation that we heard in Ethiopia is that when migrants return home, they put on a brave face. They don’t talk to their friends and families about their negative experiences, or at least they don’t tell the full truth. Instead, they emphasize the positives. Perhaps they bring back exotic clothes or sunglasses or phones, which others read as signs of success. And this feeds the positive perception of migration.

The reluctance to open up about what are often traumatic experiences is understandable, but it also contributes to the false hope of others. Several organisations are working to fill the gap in support and rehabilitation services for those who return. If done sensitively, there is a real opportunity to help those who want to tell their story, so that potential migrants who may already know a lot about these risks in theory can be helped to think through what these violations actually mean in practice. Experience from other sectors suggests peer-led education can be much more effective than information provided by third parties.

The RMMS report also highlights migrants’ misperceptions about the cost of travelling through more regulated channels as opposed to illegal routes, though even legal migration poses risks. Making legal migration safer and more accessible could make a huge difference for thousands of Ethiopians.

Of course at the heart of the issue is that many feel they have little to lose by leaving their communities. Without educational and economic opportunities, they assume that whatever they encounter must be better than the future they foresee at home. As a result, efforts to reduce risky migration will most likely succeed if bolstered by a reasonably appealing alternative. The Freedom Fund is consulting with the Ethiopian government and civil society about how best to support a comprehensive approach, so that staying home is a realistic option for those who would be most vulnerable as migrants.

Ultimately, migration can be a good thing for individuals and for both source and recipient countries. A big part of the challenge is making sure Ethiopians have viable alternatives at home and abroad, and that those who do choose to migrate have the information they need to make the safest possible choices for themselves and their families.