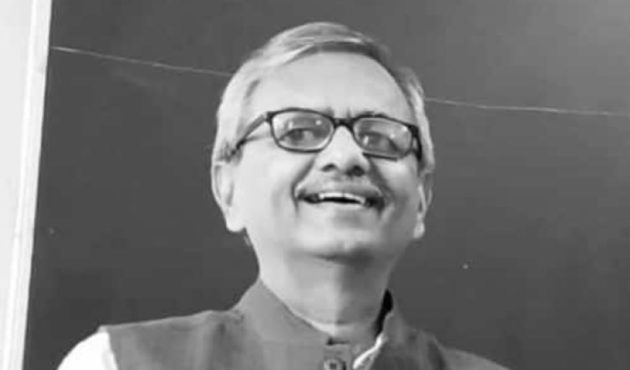 Today we heard of the loss of an anti-slavery leader in India, our friend Dr Sunit Singh, after a long struggle against ill health.  I’m thinking of the dozens of communities of former stonebreakers, where all are now living in freedom because of the decades of work of Sunit and of the organisation he led, Pragati Gramodyog Sansthan (PGS), in Uttar Pradesh, North India.

The image at the front of my mind is of a hot afternoon sitting with Sunit in a rough grassy area between stone quarries, with a very elderly woman forcefully singing her heart out with a freedom song, at the centre of one of the mass “picnics for unity” that Sunit and PGS organised across the communities some years back. It was one of countless “innovations” he tried over the years. In this case, the idea was that if people had celebratory meals together, it might help them work more amicably in their Self-Help Groups. Another such innovation was holding marriages collectively in the village so that the excessive costs could be shared rather than families falling back into bondage due to the loans for getting young people married.

I first got to know Sunit around 2001 when, while I worked at Free the Slaves, I heard of what was being described as a “Silent Revolution” of the stonebreakers.  At the time, it seemed that the only idea for anti-slavery work was for outsiders to rescue the victims, so this stonebreakers movement got my attention, as it had done for Sunit.  The stonebreakers across multiple sites in the region were coming together and rejecting bonded labour, renouncing phoney debts to the illegal contractors who’d controlled their families’ lives for generations.  When the contractors tried to retaliate against resistant communities, thousands of workers would turn up from nearby quarries in support.  Sunit was drawn to the emerging movement and his participation in it never stopped.

PGS works with the stonebreakers and builds their knowledge of their rights and their fundamental human dignity while helping them hold statutory bodies accountable. Sunit worked with his team on approaches that helped bonded labourers overcome what he understood as their very real fear of freedom. A vital part of it was that people like themselves, former bonded labourers, should be among those bringing the message of rights and new livelihoods to these exploited communities.

As a committed Gandhian practitioner, Sunit’s focus was always on peaceful, creative actions and on the power of united communities – ideas that 20 years later are common among civil society efforts against bonded labour and trafficking in India.  One of his recent, successful organising efforts was a farmer producer company, owned collectively by hundreds of former bonded labourers and small farmers so they can market their organic produce to urban consumers in nearby Allahabad.  For me, seeing this, it was yet another surprising development in PGS’ field.  It was not really planned for in any project proposal for a funder, but it was an amazing transformation from people being in slavery as stonebreakers, literally wielding hammers and setting dynamite to smash rocks – to being farmers using a mobile phone app to deliver their produce.

Sunit believed in people.  He helped them believe in themselves. This will always be his message to the anti-slavery movement.

Ginny Baumann is a Senior Program Manager at the Freedom Fund.