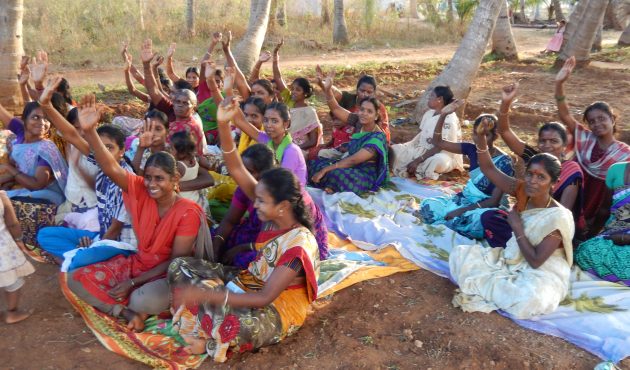 The textile industry in southern India provides vital jobs and incomes in poor communities, but instances of bonded labour are often found within the industry. The Freedom Fund’s Southern India hotspot helps reduce bonded labour in textiles, especially among girls and young women working in spinning mills. We support community groups and work with government and businesses to reduce vulnerability to bonded labour, improve education and opportunities. This is Shanthi’s story, of one of the hotspot’s local group leaders.

Shanthi is an 18-year old living in a village in Tamil Nadu. Despite her father’s work in agriculture and her mother’s job at a textile mill, Shanthi had to drop-out of school and work at the mill to help support her family. She had to work 10 – 12 hours a day, receiving 150 rupees ($2.25) per shift. Shanthi was not allowed to sit or rest during the whole work day, which caused severe leg pains and health problems.

Shanthi decided to join the adolescent girls’ group run in her village by Freedom Fund NGO partner Vaan Muhil, and she was quickly elected as the group secretary. Shanthi explained that she wanted to continue her studies or pursue an alternative livelihood, so Vaan Muhil helped her complete a tailoring course and provided a sewing machine. Now she earns an income as an independent seamstress providing services to the surrounding villages. Shanthi has become financially independent, making around 5,500 rupees per month ($82).

“I was an adolescent girl in the mill for more than two years, but now I am living as a changed person. I have gained confidence and hope and I am able to stand on my own two feet. I have also been appointed as the community facilitator for my village. I have the confidence needed to make the community resource centre more effective,” Shanthi says.

Find out more about the Freedom Fund’s Southern India Hotspot.