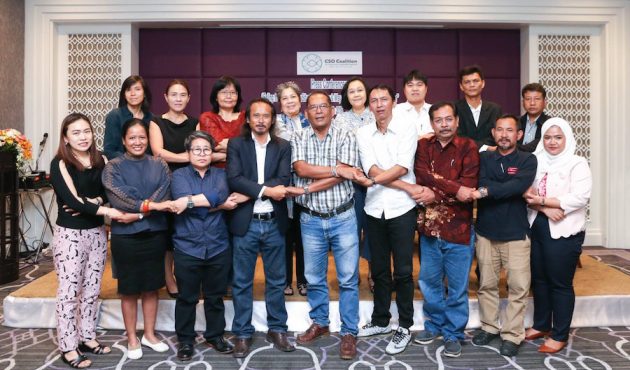 In recent years, the Thai fishing industry has come under international scrutiny for its abusive labour practices. Migrant workers have reported physical and verbal abuses and daily discrimination from their employers and local authorities. Civil Society Organizations (CSOs), international buyers and key exporters have continued to invest resources into addressing these allegations. Additionally, the Thai government has swiftly passed legislation and demonstrated a high level of commitment to reform the industry. It is, however, difficult to assert whether these reforms have delivered promised results to eliminate slavery from the fishing industry.

Recently, a group of national CSOs has come together and formed a CSO Coalition for Ethical and Sustainable Seafood – supported by the Freedom Fund and Humanity United – aiming to address human rights and environmental sustainability issues in the Thai fishing industry. This collective platform of frontline NGOs aims to work as industry and government ‘watchdogs,’ as well as provide constructive feedback on ongoing reforms. Currently, the CSO Coalition is made up of ten Thai NGOs, half of which are labour NGOs and the other half are environmental NGOs concerned with the fishing industry.

In May 2018, the CSO Coalition formally launched its first collective survey of basic labour rights among migrants working in the Thai fishing sector. The report, Falling through the Net, reveals both signs of progress and existing gaps in the recent industry reforms. The survey was conducted through intensive collaborations between Freedom Fund partner organisations, including Labor Rights Promotions Network, Migrant Workers’ Rights Network, Stella Maris Seafarers, Human Rights Development Foundation and Foundation for Education and Development in Thailand.

The research was conducted between December 2017 and February 2018, during which the CSO partners surveyed 300 migrant workers employed in the Thai fishing industry in six coastal provinces. Survey questions addressed working conditions, terms of employment and employer practices, with a focus on working hours, occupational health and safety and fishers’ interaction with government officials.

What Needs to Be Done?

As one can see, existing gaps strongly outweigh signs of progress in the current reforms. Despite the dynamic changes and rapid evolution of the industry, the CSO survey suggests several alarming findings.

First, progress is still being impeded by the ineffective enforcement of labour laws. While the government can change the laws swiftly, effective implementations take time and investment in local government’s capacity. ­­­

Second, progress calls for a more tangible and impactful collaboration between government, the private sector (both international buyers and seafood exporters) and civil society organizations. These dynamic and adaptive challenges cannot be solved by one single group of actors alone. One needs a shared vision, a realistic action plan and effective feedback mechanisms.

Finally, building trust and accountability systems will be a critical success factor. When governments and companies commit to action, such as adopting international conventions and implementing transformative initiatives, they should follow through on these commitments. Otherwise, this would create unproductive mistrust and result in fixes that fail to improve the lives of vulnerable workers.

Pictured: Members of the CSO Coalition for Ethical and Sustainable Seafood