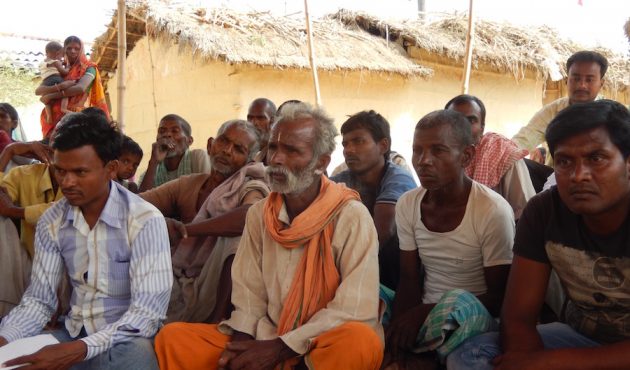 The Freedom Fund’s northern India hotspot aims to reduce trafficking, bonded labour and harmful child labour in two of India’s poorest states. Working with frontline organisations, we help communities build resistance to trafficking and slavery and reintegrate individuals coming out of situations of exploitation, such as Ramanand.

Ramanand had taken an advance of Rs.1,500 ($20) from Mangala Singh, a stone-quarry contractor who required him to repay the loan by crushing stones on an illegal mining site. For seven years, Ramanand received only a quarter of the market wage, yet the original loan remained unpaid. When he tried to break out of the debt trap by selling stones to another contractor, Mangala Singh beat him up and demanded repayment of the entire loan.

One of the Freedom Fund’s partners, Pragati Gramodyog Evam Samaj-Kalyan Sansthan (PGS), works to create comprehensive, holistic community-based freedom interventions that address many of the root causes of bonded labour, including access to legal aid and education, land rights, health, social security, food security and economic development. Ramanand’s mother is the president of one of the PGS Self Help Groups. With the support of the self-help group, Ramanand filed a police complaint against Mangala Singh. When Mangala Singh refused to appear in response to the police summons, the police raided Mangala Singh’s house eight times and also restricted him from going to his illegal mining site.

Finally recognizing that he would not escape accountability for the crimes he had committed, Mangala Singh and his family approached Ramanand. They were eager for a compromise and promised to respect Ramanand’s rights. The compromise was agreed in the presence of the police and PGS. Mangala Singh promised that he would never harass Ramanand again nor make demands for money.

Ramanand, free from debt, now works on a legal mining site and earns fair wages. His children attend school. The intervention of the self-help group saved an entire family from intergenerational bonded labour.

Mangala Singh also underwent a transformation. Understanding the power of collective action demonstrated by the SHG, he now allows his workers to meet with the self-help group workers, and he respects their rights.

The self-help group is enthused by their victory in shifting the local power balance without violence but through the use of legal knowledge and collective negotiation.

Find out more about the Freedom Fund’s northern India hotspot.