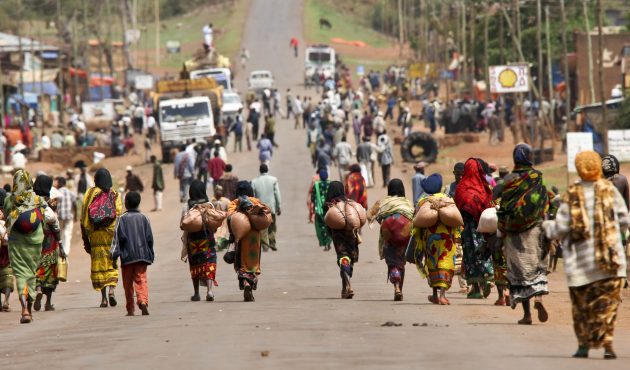 Irregular and oftentimes dangerous migration to the Middle East for domestic work is the norm for Ethiopian girls living in impoverished communities. Seeking economic opportunities abroad, many of these young women face risks of abuse and exploitation, and most don’t know enough about safe migration to make an informed decision. The Freedom Fund’s Ethiopia hotspot promotes safe migration for women and girls travelling to the Middle East for domestic work and supports education and recovery services for potential migrants and returnees.

Meaningful and transformative change that empowers vulnerable communities can come from many places. We believe it fundamentally comes from the communities themselves, but also from the individual decisions that women and girls make as members of these informed communities. Change also needs to be supported from the outside, to be nurtured by the structures within which every woman and girl makes decisions for herself.

In Ethiopia, one of these structures is the system of iddirs. Iddirs are community-based insurance-type groups set up to help families in times of bereavement. They are also an influential traditional social structure that has legal license to act on social issues. Everyone in Ethiopia is a member of at least one iddir, and in many cases, the iddirs are more powerful than the police and court system.

This is why one of the Freedom Fund’s objectives has been to engage iddirs on the issues of safe migration and human trafficking prevention. Through our local partners, we have mobilised iddirs to take on safe migration and make it their own. As a result, up to 80 percent of the iddirs in the areas where we work have adopted by-laws on safe migration, making it officially their mission to take leadership and action on this issue.

Our hotspot model concentrates our efforts on focused geographic areas. We support the emergence of interventions that will lead to impactful change, and we then think about ways to replicate and scale those approaches.

By engaging the iddirs, we’re able to have an impact far beyond the individuals we reach directly. In Addis Ababa, the hotspot is active in one of the 10 sub-cities. Within that sub-city, we are operational in five of the 10 lower administrative areas, called woredas. However, iddirs exist across the whole capital city and come together under a Council of Iddirs.

We created a network that brings together all our active iddirs groups across the five woredas. Having claimed leadership on the issue of safe migration, our network presented its work before the Council of Iddirs and called for action. In doing so, it allowed the issue of safe migration to cascade through the Council of Iddir structure, all the way through the 10 sub-cities in Addis Ababa, and the many woredas within each.

The efforts and success of our partners illustrate well how community-grounded demands can be amplified through the right structures in order to support wide and long-lasting change, far beyond the direct communities where our partners are delivering services.