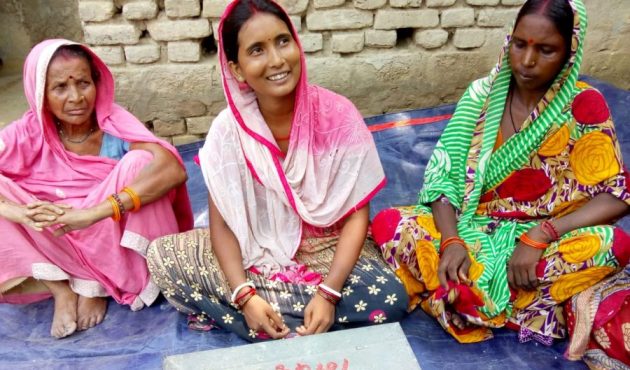 Veena was 17 years old when her uncle arranged to marry her off to a man from a village two hours away from her home in the state of Bihar, in India. She had never met him.

When Veena arrived in her husband’s home, she was told she needed to rise each morning before 4:30am to prepare a meal for the seven members of her husband’s extended family who shared the small house with her.

She noticed that each day, the whole family would leave for work before dawn, and wouldn’t return until very late in the evening. Even the two children – aged 10 and 14 – her husband’s little brother and sister, would go to work. She learned that the family was working in a brick kiln.

Veena’s mother-in-law told her they had been working in the kiln for years. They were in debt to the brick kiln owner, who was forcing the whole family to work to pay the debt off. This is incredibly gruelling work, with adults spending up to 14 hours a day mixing mud and soil to make the bricks and then carrying them to the kiln, and with children working alongside them for up to 9 hours a day.

Veena could see the family was struggling to feed themselves, and her husband was taking further loans from the kiln owner at extortionate interest rates to pay for food.

She learned that the other families in her husband’s village were in the same situation. Many of them had inherited debts from their parents, and were caught in an endless cycle of debt bondage that had been going for generations. Effectively the whole village was in slavery.

Veena couldn’t see any way that the situation would change, and became depressed.

About a year after Veena’s marriage, she joined a community group set up and facilitated by Nirdesh. This group, comprising 37 women, met each month to discuss the issues that kept their families in bondage.

It was here that Veena first heard the term “bonded labour”. She learned that she had rights just like everyone else.

The first transformation for Veena and the other women was psychological – realising that just because generations had been living this way, they didn’t have to share the same fate. It may be hard to believe but many of them had never even conceived of trying to challenge the way things were.

Then the group began exploring practical actions they could take. With Nirdesh’s help, they began to bargain collectively with the kiln owner.

Over a period of six tense months, during which some of the villagers withdrew their labour and both they and Nirdesh were threatened by the kiln owner, they finally got him to agree to release them on the understanding that some would continue to work at the kiln for fair wages. 37 women and their families were now free of the system of bonded labour that had oppressed them.

Nirdesh had been organising skills training for the women in the evenings, where they learned how to tailor and make bangles, and now that they were free to work outside the kiln, they began earning an independent income.

Nirdesh soon opened up a small transitional school in the village, and Veena was appointed as teacher. She became a leader in her community, urging families to send their kids to school. With Nirdesh’s help, she began to obtain government benefits for her fellow villagers, such as food, educational scholarships, and basic documents.

She didn’t stop there. Veena and some of the other women began mobilising families in the adjacent communities to follow their lead, and escape the cycle of debt. Their example created a ripple effect, and today, more and more families are exiting bonded labour.