What matters most for successful reintegration of rescued children? 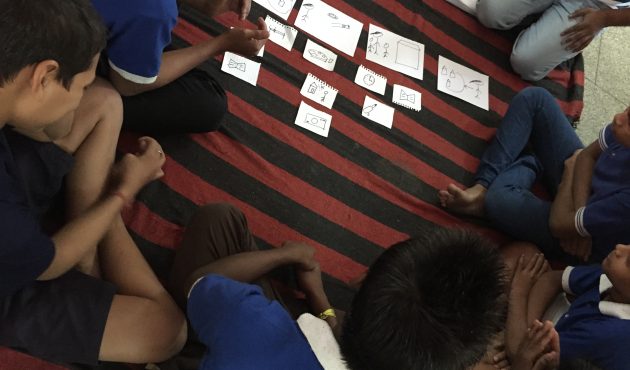 The Freedom Fund is working with Praxis India to carry out a feasibility study for a new program on child trafficking in the Indian state of Rajasthan.

At a transit home run by the local NGO Taabar in Jaipur, Rajasthan’s capital, we asked volunteers to talk about what to include in activities for reintegrating children who have been trafficked in their home communities.  Six of the boys, aged 10 – 16, offered to talk with us.  Nearly all the 32 boys staying at the shelter had been trafficked to Jaipur from villages in Bihar state and were then rescued from bangle and embroidery workshops.

To access the children’s knowledge, the researchers asked them to think about an imaginary child, Pradeep. They asked about this imaginary character in order to avoid the boys having to repeat their own possibly traumatic circumstances. One of the researchers drew four sketches of the character, laying them out on the carpet in the middle of the group. The sketches showed Pradeep leaving his home, working at the factory, being rescued and finally returning home.

The researcher asked, “When Pradeep was in his home village, what did he need to be able to stay there?”  The children seemed a bit stumped.  It was a very hard question.  Finally, one boy said that even if Pradeep is educated, he can’t stay in the village.  Maybe if there was enough food and income he could stay.  So the researcher sketched a picture of food and money.

Then the researcher asked, “What did Pradeep need at the workplace?”  The boys were more emphatic:  He needs food on time, he needs a lunch break, he needs enough sleep, only eight hours of work, he should only work until the evening.  He should be allowed to walk outside in the evening.  He needs wages of Rs.8,000 – 10,000 ($120 – 150) per month.  Clearly these were things the boys had lacked.

The researcher continued, “But Pradeep wasn’t getting anything, so he got rescued.  What did he need at the shelter?”  The children said he needs to study hard, so he can get a better job.  He needs to play games.  The researcher drew a cricket bat.

“Then what would help Pradeep not to come out from the village to work again?”  The boys talked first about what they needed from the schools: The teacher needs to be there, they need a good classroom and school lunches – and time to play. “What else?”  They said that people should counsel the children not to go away.  The village head can counsel the parents not to send their children.  Children should share information with other children about working conditions if they go away.

“How many children go out of Pradeep’s village to go for work?”  They replied that about half are going.  They said that the people who take them say that they will get good food and watch TV, but the brokers lie to the parents.  These people say that they will send wages home on time, but it never happens.  Once the villagers realise that they’re lying then the brokers go to another village and get people who’ve never heard the story before.

A clear picture emerged.  The program must make sure people can access income, nutrition and decent schools, as well as a good understanding about what trafficking really is.  But the children have also given us an implicit warning and a challenging question: How do we stop the traffickers moving on to a different village?