“Why should we fear?”: Girls demand higher wages 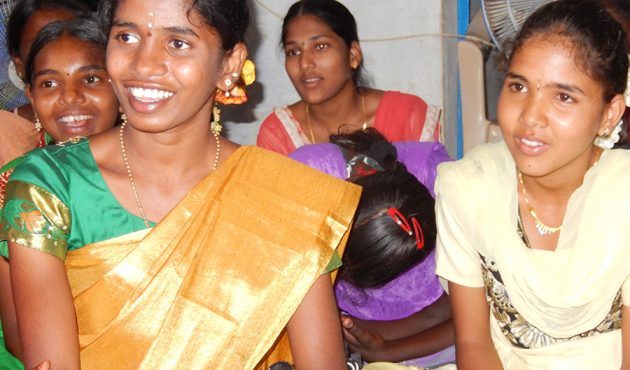 The textile industry in southern India provides vital jobs and incomes in poor communities, but instances of bonded labour and other abuses are often found within the industry. The Freedom Fund’s Southern India Hotspot helps reduce bonded labour in textiles, especially among girls and young women working in spinning mills and garment factories.

In one of the villages where our partner Vizhuthugal recently started work, the 18 members of the adolescent girls group are tackling a whole host of problems. These problems range from the unsafe atmosphere in the garment factory – “touching in a bad place” – to the desperate need of the working members of the group to have more rest time during the day.  They want more than 10 minutes’ break.

To start to tackle these problems, the girls appealed to the adult support group that has also begun in the village.  Seven of the girls, all of them under 18 years old, are working at the same factory, and had only been earning Rs.150 ($2.20) per day, often leaving home at 7.30am and not getting back till 9.30pm.  As a small group of young workers, their requests to management were getting no attention.  Things might stay the same forever.

So they arranged for several adult support group members to come to their factory and talk with them with the manager.  Once the workers were called to the meeting, the adult group members pressed their point “These girls have been working here for years and you’re still paying so little.  It’s not even minimum wages.” The manager was not ready to give an answer then and there.  He said he would take a week and then let them know.  The girls assumed it was another brush off, it had all come to nothing.  But when they received their pay next week it had increased – to Rs.350 ($5.10) per day.  Still, given the hours worked, it’s less than minimum wages, but it’s a hike from the earlier Rs.150.  They said they were happy and amazed. 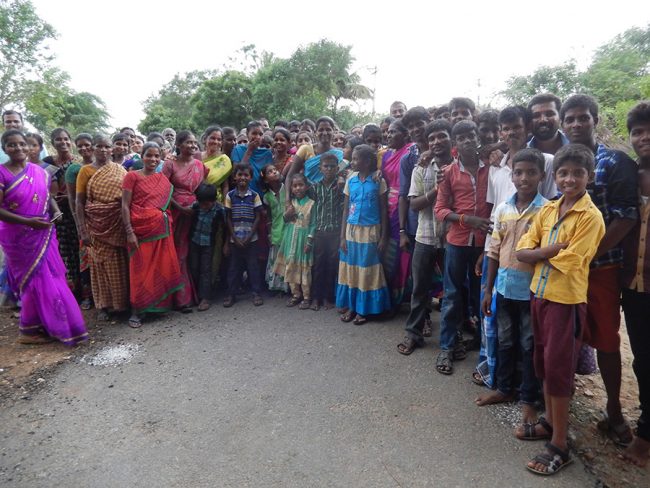 Pictured above: Residents of the hamlet where Vizhuthugal is working.

It’s a small beginning, still falling short of India’s worker protections, but now the girls feel ready to negotiate for themselves.  The factory management has got the message that the young workers have concerned community members who stand behind them.   One 15-year-old explained that now she insists on coming home at 5:30pm.  Another group member explained that she is demanding to study and not to go to work yet.  They are learning about their legal rights.

The group facilitator, herself a former garment worker from the same village, has known all the girls since they were young.  She said “I can see the confidence level of the girls now.  They are ready to talk to the managers if they’re being abused at the workplace.  Before this group, they didn’t even talk to me.  Now they share their problems with me.”

Moving on to the next village, we found that the idea of enlisting the adult support group and going together to the factory management was spreading:  Both the boys group and the girls group had done the same in this village.  The support group and the young workers told the owner that they were not able to live on Rs.200 per day.  Now they get Rs.300, and already they’re asking for shorter hours and they want an hour for lunch.  We asked the girls whether they were anxious when they asked for these changes.  One of them responded “Why should we fear, we’re girls, we won’t fear anyone.  We can do it on our own now.”

Find out more about the Freedom Fund’s Southern India Hotspot.