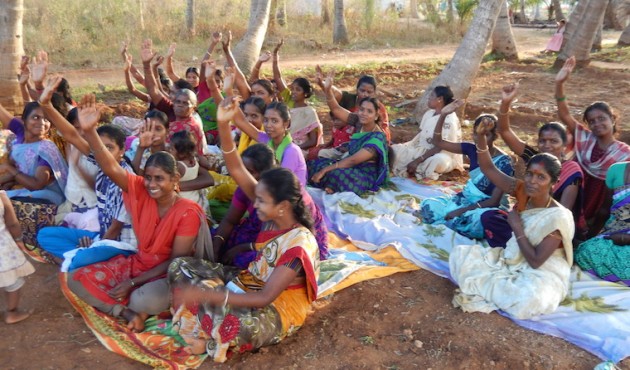 “We will not send the children for work… we believe we can make it happen”.

We’re visiting local organisations and government bodies that are working for an end to bonded and child labour in spinning mills in Tamil Nadu, South India.  During a visit to Thavasimadai village, a group of women told us that around 200 people go to work in the spinning mills each day from this area, normally working more than 10 hours each day.  Many of them started work in the mills aged 14 or 15, some even younger, and most have worked between 6 – 10 years by now. 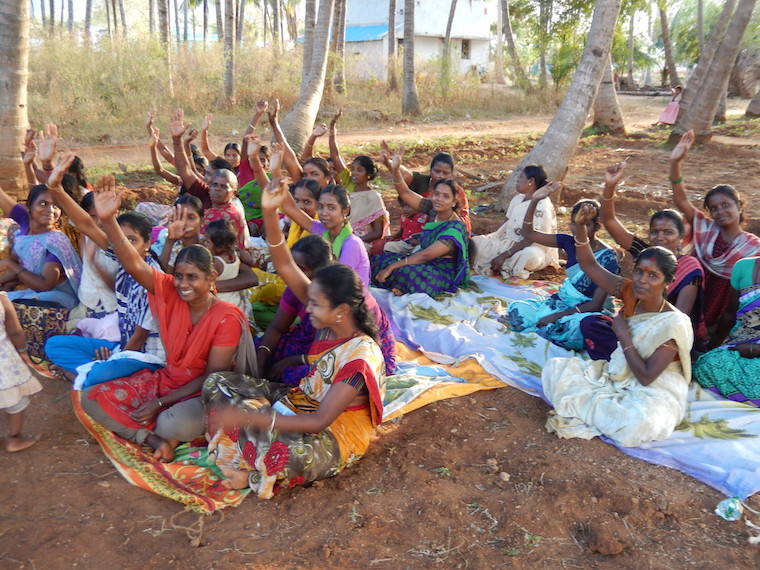 Income from this work is vital for the women, even though their pay is below the government’s minimum wage for apprentices.  They work in the mills because many years of drought conditions mean that it’s no longer possible to feed their families through daily work in agriculture.  When they first started the work, many of them were taken by brokers to live at the mill hostels on the promise of a lump sum payment at the end of 3 years work – but some had not received the payment.  They said that conditions at the hostels were the worst.  They couldn’t sleep properly – some said there were too many cockroaches.  The food was bad, and very often they were forced to work extra shifts.

Now that they live at home and go into work by bus, life has slightly improved, but they worry about the adolescents who are still taken away from their village often ending up working in bonded labour, living at the mill hostels.  About 30 are gone from the village at the moment and most are on 4 year “contracts”.  When the young people come home for their annual leave of 3 – 4 days, the women said that their health is poor and they are visibly tired.  The young people cry about the food and about all the overtime they have to work.  One woman explained, “If they complain about stomach pains or other illnesses and ask for a day off, the supervisors scold them and tell them not to make excuses.” But currently, the adolescents have no choice but to go back.

Ending the bonded labour of these young people is not a quick and simple job. Just raising awareness of parents about the conditions of workers who are trapped in the hostels is not effective: Many local residents have already personally suffered this.  They know all about it.

Instead, a local organisation, SSSSS, has been working with this group of women for many months, helping them figure out what would make it possible to keep the children at home and enrol them in school. Some of the women are going to SSSSS’s training centre nearby, to learn tailoring.  They find the time to do this, despite already working 10 – 12 hours, and once their skills have improved, they can take orders for producing school uniforms, as a better source of income.  Also, they have formed what is called a “Joint Liability Group”, and together they have taken a loan from the bank at a modest interest rate, and they are paying it back collectively.  With the loan, they have taken a lease on a large coconut grove with over 200 trees.  They have calculated that the yield of Rs.40,000 (about $670) from each coconut harvest, 9 times a year, will quickly pay back the loan of Rs.125,000 ($2,083) for the lease.

Their purpose is clear: “When we get adequate income we will not send the children to work.  We will send them for education.”  We ask if it’s really possible, and one of them answers for the group “We believe we can make it happen.”