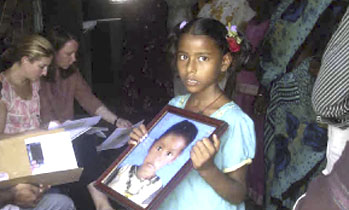 This week, we were visiting families affected by bonded labour in the powerlooms in Tamil Nadu, Southern India.

In one of the villages, we had just arrived and moved out of the heat into a small dark room, where a man, woman and two children came to talk with us. We were rapidly confronted with the full meaning of modern slavery taking place in some of the powerloom factories. Many powerloom workers take loans from the owners either at the time they move from home villages to worksites, or when they have a costly emergency that their wages cannot cover. Then the workers become trapped in bonded labour, unable to work for a different employer unless they can somehow pay off the loan out of their meagre wages, or unless another employer buys them out of their debt. Then they must go to work for the new owner. When the workers have to live on the premises of the owner, the debt bondage slips even further into a form of absolute control. That was the case for this family.

They explained that because they were unable to survive on the work they could get in their home village, they had taken an advance of Rs.60,000 (approx. $1,000) and all of them had gone to work 50km away at the powerloom factory. For three years they were not permitted to go from the factory site without leaving at least one family member behind, so that the owner could be sure that they would return. Next to the premises, there was an illegal electric fence. One time, the parents needed to go back to their village to sign up for a government food ration card. This time the owner required them to leave two of their daughters (aged 6 and 8) at the factory site.

As the parents told us about their tragedy, I had to stop taking notes: While the parents were away, the 6 year old accidentally touched the fence, was electrocuted and died. Hearing about this, a team of 10 people from a local NGO that works against bonded labour, Vizhuthugal, rushed to the area within one hour to prevent the owners removing the evidence. The factory owner gathered 50 – 60 other owners and factory managers to intimidate people.

A young child holding a photo of her 6 year old sister who died at a powerloom factory. Photo: Ginny Baumann

The Vizhuthugal workers explained that they went to the police, but initially they could not get any action from them, but finally they were able to get a case filed. Still, the police tried to avoid filing the case under serious charges. In the end, the organisation was able to get the case filed, not only against the owners but also against the police for not doing their job properly.

Vizhuthugal regularly follows up with the family, helping them cope with their loss. Still life is difficult with both parents working 12 hour days at a different powerloom but at least they can live at home and can move around freely. They are happy that the two children are now enrolled in school.

Not just helping this one family, Vizhuthugal set up a young adults group in the settlement, with 25 members who are working for the protection and rights of the low caste (dalit) families living there. They have succeeded in ensuring that the settlement has concrete roads, better housing and toilets. As we left the village, the Director, Mr. Thangavel, told us more about the context of their work: Vizhuthugal is the organisation that people turn to and trust because it is part of a movement of 7,000 dalits that has members throughout the area. The organisation is led by people from the same background. Mr. Thangavel explains “My people are struggling in every part of life. From birth to death it is a struggle. In every village, there are a few cases like this.”

Note: The Freedom Fund is about to start a hotspot program in Southern India working against bonded labour in textiles and has not yet funded any local organisations in the area. Activities of Vizhuthugal are mostly funded through regular contributions by its own youth group members.