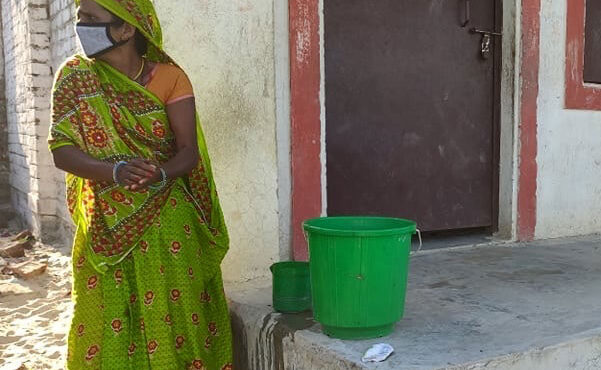 COVID-19 has had a devastating impact on those most vulnerable to forced labour and human trafficking, and things could get even worse.

Around the world, communities already suffering from poverty and exploitation have borne the brunt of the pandemic and its economic fallout. Government-mandated lockdowns and the shuttering of shops and factories have pushed millions of families to the brink of starvation.

From rural India to the slums of Brazil, many of those who can least afford it are resorting to high-interest loans from local moneylenders to buy food or to pay emergency medical bills, putting them at risk of falling into debt bondage. More families are sending their children into work or marrying them off early as a way of coping with the economic shockwave that has hit them over the past six months.

In April 2020, the organisation I work for, the Freedom Fund, set up an Emergency Response Fund to help mitigate some of the worst effects of the crisis. We disbursed nearly 200 flexible grants to frontline civil society groups in Thailand, Myanmar, India, Nepal, Ethiopia and Brazil. The funds were used to provide vital supplies such as food, soap, protective equipment and cash to marginalised communities and to help them alert local authorities to needs on the ground.

In reviewing our response to the crisis, a clear picture has emerged not only of its short-term impact but also the trends likely to persist into the long term. We have summarised these in our report, “Global Pandemic, Local Devastation.”

The economic shutdown has fuelled opportunities for abuse and exploitation of the most vulnerable – that much is obvious. But what is also clear is that the crisis has put at risk many of the hard-won gains of recent years in many areas, including labour rights, gender equality and child protection.

Two mutually reinforcing trends are putting pressure on labour rights. Just as millions of labourers and their families are suffering increased deprivation, the global recession is driving down demand for workers. This has shifted the balance of bargaining power decidedly in favour of employers. We are seeing this play out everywhere that the Freedom Fund works.

In Thailand, migrant labourers in the seafood industry are being sacked illegally or having their wages withheld. In India, workers in cotton spinning mills are being forced to accept longer hours and lower pay. As a new report by the Business and Human Rights Resource Centre documents, order cancellations by international clothing brands are being used by some factories as a cover to crack down on unions.

The rights of women and children are also under threat.

Domestic violence and child abuse during the crisis have risen around the world, as lockdowns and school closures removed vital protection mechanisms and left women and children at the mercy of their abusers. Among the world’s poorest populations, the effects have been severe.

In Brazil and Nepal, for instance, we have received numerous reports of increases in early and forced marriage, child labour and child abuse. Parents are having to go out and find informal jobs despite the lockdown, leaving out-of-school children unattended and vulnerable to exploitation by others. There are also increased online risks, as children have more time and access to phones, with a rise in child pornography reported by some NGOs.

Amid this dark picture, there are rays of light. Our report highlights the success and life-saving importance of community-based initiatives.

Where governments failed to deliver swift assistance or identify the most vulnerable, frontline organisations already knew where help was most urgently needed and were able to quickly mobilise – at low cost. They were able to work with the authorities to help channel official aid to those on the margins and advocate for the rights of groups who might otherwise fall through the cracks or be taken advantage of.

As the international donor community is increasingly coming around to the idea of ‘localisation’ of aid, it can build on the wealth of frontline initiatives already being modelled and play a key role in boosting their capacity.

But there can be little doubt the crisis has dealt a heavy blow to those at highest risk of exploitation, and only concerted action can prevent tragic long-term consequences.

While it is inevitable that a pandemic will cause hardship, it is unacceptable that it be used as an excuse by governments and businesses to turn back the clock on human rights.

However challenging and unprecedented this situation this, all governments need to uphold human rights and maintain pressure on business not to renege on their commitments to ethical practices. And businesses themselves must not allow the protection of their bottom lines to mean the exploitation of ever more vulnerable workers.

This op-ed originally appeared in Thomson Reuters Foundation on 16 Septemeber 2020.