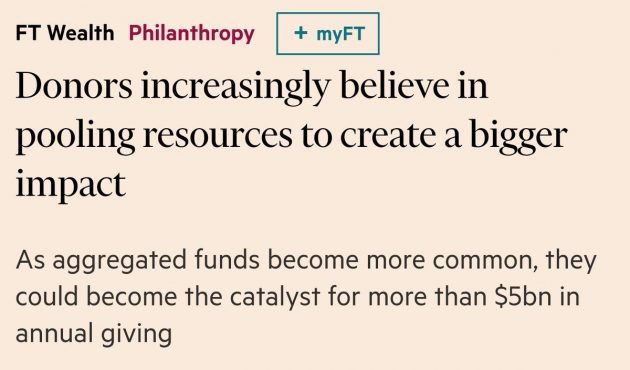 This Financial Times article highlights the Freedom Fund and its founders on the systems impact of pooled philanthropic funds and the importance of collaboration. Read the full article here.

When nine-year-old Raj Panjabi and his family fled the Liberian civil war in the 1990s to the US, the idea of having access to millions of dollars was unimaginable. Yet this became a reality this year when a multimillion-dollar grant was awarded to Liberia’s National Community Health Assistant Program, whose partners include Last Mile Health, the non-profit organisation Panjabi co-founded.

The funding for the programme, which aims to bring healthcare to more than 1m people in Liberia’s remote communities, is among the first round of grants announced in January by Co-Impact, a collaborative fund launched last year by Olivia Leland and backed by billionaire philanthropists, including Bill and Melinda Gates and Jeff Skoll.

The Co-Impact grants are sizeable: between $10m and $50m over five years; the first round gave away a total of $80m. But what makes them particularly notable is that they form part of an emerging phenomenon: collaborative giving initiatives that some hope will unleash vast sums of charitable funding.

For Panjabi, the Co-Impact grant’s benefits extend beyond money to the ability to become part of a bigger system of change that involves governments, local non-governmental organisations (NGOs) and others. “If you go it alone, you won’t go as far as you will if you go with others,” he says.

The approach runs counter to more traditional forms of giving. For wealthy donors, philanthropy usually means making individual gifts and being acknowledged for them (often with naming rights) or funding foundations bearing the names of their creators. Now, wealthy donors are starting to come together to pool their resources.

“You’ve seen the rise of these massive funds,” says Alison Powell, senior director for philanthropy at the Bridgespan Group, the philanthropy advisers whose clients include Co-Impact. “We do see a move to more of this aggregated giving.”

Healthcare services in Liberia funded by Last Mile Health
In a report on what the wealthy are doing to achieve more with their philanthropy, Bridgespan estimated that as aggregated funds become more common, they could become the catalyst for more than $5bn in annual giving.

As well as being able to pool significant sums of philanthropic funding, these collaborative initiatives express a new level of ambition in their goals. Co-Impact, for example, says its aim is to improve education, health and economic opportunity for an estimated 9m people in Africa, south Asia and Latin America over the next five years.

Joining Co-Impact in the collaborative approach are groups such as the Freedom Fund, which in 2013 brought together three foundations to combat modern slavery: Humanity United (part of eBay founder Pierre Omidyar’s Omidyar Group), the Legatum Foundation and the Walk Free Foundation.