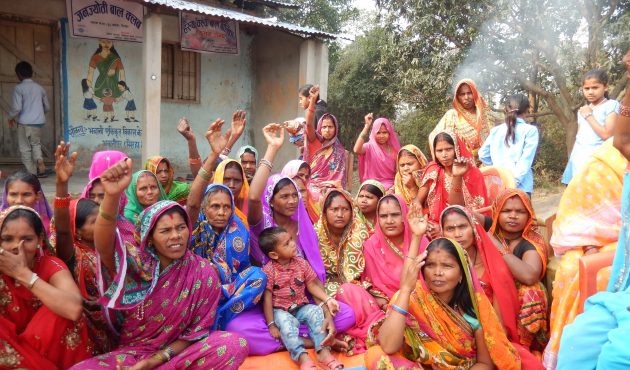 While often overlooked, grassroots groups are the ones making a measurable difference in people’s lives.

In February, in the town of Lahan in the Eastern Terai region of Nepal, I spoke with Mani Lal Bishwakarma, a program coordinator for a local NGO. We were funding Mani’s organisation to help a group of lower caste agricultural labourers file land claims with the government. Most of the labourers and their families had been living on the same land for generations, but were held in a form of debt bondage to local landlords. Without land rights, they faced the constant threat of eviction, which made it easy for landowners to exploit them.

“We are doing well,” Mani told me. “In three months, we have secured Land Inhabitant Certificates for 63 families.”

Armed with the certificates, the families could not be evicted. But securing them was not straightforward. Individuals first needed a birth or citizenship certificate, and then an application had to be filed with the local Village Development Committee showing that the applicant had been resident in the same place for 15 years. But with help from Mani and his team, progress was being made.

“How many do you think you can get done this year?” I asked him.

An estimated 110,000 men, women and children in Nepal are affected by this type of bonded labour. Mani was telling me that he would be able to help secure land rights for 1% of that population in just the first year of the grant, before the program had reached full flow. This on a budget of $26,000 per year.

“Once they have the certificates, they can never be lost,” added Mani’s colleague Madhu, the IT manager. “We have the documents scanned and backed up digitally for the long term”.

I’ve always been awestruck by what local NGOs can achieve with a small amount of money. $26,000 a year. That’s a rounding error for many big organisations. In this case, it could permanently reduce the vulnerability of a group of people that have been at the bottom of the food chain in Nepal for generations.

Too often, grassroots NGOs are overlooked by donors because they are perceived as too small or risky. Yet these frontline organisations are the ones making a measurable difference in people’s lives. This week, the Freedom Fund celebrates a milestone: we have now granted ten million dollars to NGOs like Mani’s – those on the frontlines of the fight against slavery. I’m proud that we have been able to get a significant amount of money to organisations that we know are doing life-changing work. $10m is not a lot in the grand scheme of things. But when it gets to the right organisations, it can go a long way.

I know that funders are not supposed to celebrate how much they spend anymore. I remember a few years back, Andrew Mitchell had recently become the UK’s Secretary of State for International Development. He was sending a strong message that he didn’t want any more announcements about DFID’s spending commitments, only about impact and results. He wanted the aid industry to move beyond the days of glossy success stories and feel-good headlines. Which made sense – and is certainly a maxim that we adhere to at the Freedom Fund. We devote a lot of energy to posting on our impact page the results that our partners have achieved with our support.

But in some circumstances, I think it’s ok to be proud of spending in the right way. We are working with our partners to end modern slavery at a time when there has been a spike in international attention to the issue. The number of organisations, policy-makers and businesses that are beginning to engage, and the number of events that are going on to discuss and coordinate strategies, are growing at breakneck speed. And yet, for all that, there is still a paltry amount of funding actually getting to the groups that are at the sharp end of the spear.

So I’m proud of the $10m milestone. Yes, it takes time to identify the right partners, to help them build up their organisations, and to monitor results. But it is worth it. The impact these organisations achieve for the most vulnerable people is truly phenomenal. And at the end of the day, that’s what this work is all about.

Right: A self-help group in south-eastern Nepal is interviewed about their experience of the haruwa-charuwa system of agriculture bonded labour. Image: Ginny Baumann © The Freedom Fund