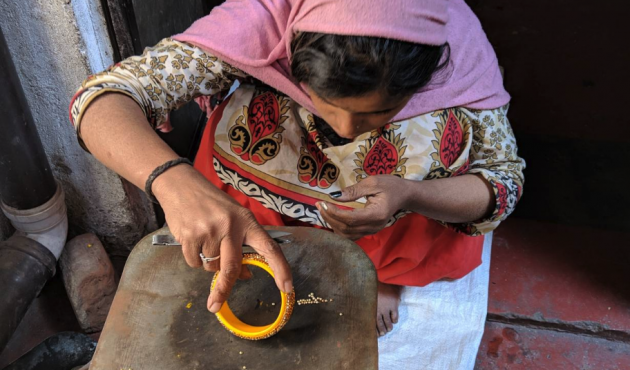 This op-ed was originally published on 26 April 2019 by the Thomson Reuters Foundation.

Jaipur is a majestic city in the northern Indian state of Rajasthan, full of imposing, rose-coloured palaces and forts and city walls. Tourists flock here from around the world to marvel at its spectacular architecture, and to buy the handicrafts that the city is renowned for – including bangles, printed cottons, embroidery and wooden carvings. These products are also exported throughout the country and internationally.

What isn’t as well known is that Jaipur is also home to tens of thousands of trafficked children, who are forced to work punishingly long days in dark, cramped and locked workshops, beaten if they don’t meet their heavy production quotas. It is these trafficked children, predominantly boys, who make some of the handicrafts that are unknowingly bought by tourists and consumers around the world.

The organisation I lead, the Freedom Fund, is one of the world’s leading anti-slavery organisations, and is supporting efforts to tackle the scourge of child labour in Jaipur. I came to the city to learn more about the challenges and opportunities.

I was struck by the scale of the problem. We visited Taabar, an impressive shelter for boys who have escaped from their exploiters. There we met boys aged from 8 to 14, and heard how they were tricked and coerced by traffickers into the workshops, forced to work 16 hour days or longer, and how some of them had chili-water splashed on their eyes if they drifted off to sleep. Of course, none of them received any schooling while they were enslaved, and often did not get enough food, nor medical attention when they invariably fell ill.

It was devastating to learn of the scale of the exploitation – and how children were being abused to increase the profits made from production of some of these handicrafts. But we also discovered that impressive efforts are being made by the local community itself, civil society groups, the Rajasthan government and business to tackle this crime. This high-level coordinated action against child labour makes Jaipur potentially unique in India.

A new and ambitious initiative – the Child Labour Free Jaipur initiative – is bringing together all these actors to coordinate and escalate their response to this scourge. The initiative is supported on the ground by the Freedom Fund and the UK charity, the British Asian Trust, with the Children’s Investment Fund Foundation providing substantial funding. It was particularly heartening to see how local non-profit organisations, are working with the local community to build awareness of the trafficking that occurs in its midst, in the slums, and thereby prevent it. These frontline organisations are helping create sustainable jobs to provide incomes for vulnerable families. Others, such as such as BBA, the charity founded by Nobel Peace Prize laureate, Kailash Satyarthi, are relentlessly advocating to the government and the police and local businesses to do more to tackle the illegal workshops.

We were encouraged by the commitment of the new Rajasthan state government to tackle child labour and trafficking.  It has strengthened government agencies and committees to deal with the crime. Senior police are also on board, though more work needs to be done to ensure that the myriad of local police stations give this crime the priority it needs.

Business is another key actor. A key priority of the Initiative is to get local businesses to commit to eliminating child labour from their production lines. Many have made pledges to do just this, but many more have yet to do so. We expect that those that haven’t will be incentivised to sign up when the police ramp up investigations and raids against illegal workshops and their customers.

Many international brands source products from Jaipur. These include Target and well-known British companies such as Debenhams, Asos, New Look and Next. These brands have made public commitments to ensure they do not have child labour in their supply chains. Given those commitments, we are looking forward to them concretely demonstrating their support for a child labour free Jaipur by publicly signing up to the Initiative. Many brands like Gap, Target, C&A, and Monsoon have already started getting their supply chains for home textiles and rugs in India independently verified by GoodWeave, a non-profit that operates a child-labour-free certification program. Business is such an important player in the fight against modern slavery and child labour, yet often international brands are slow to take a public stand – but the anti-slavery movement won’t succeed without more robust corporate support.

My trip to Jaipur left me with conflicting emotions. I was struck by the vibrancy and beauty of the city – and appalled at the exploitation that taints the production of some of its renowned handicrafts. Our hope is that civil society and government and business can truly work together to eliminate this scourge and thereby demonstrate what can be achieved when all key actors collaborate to end slavery.