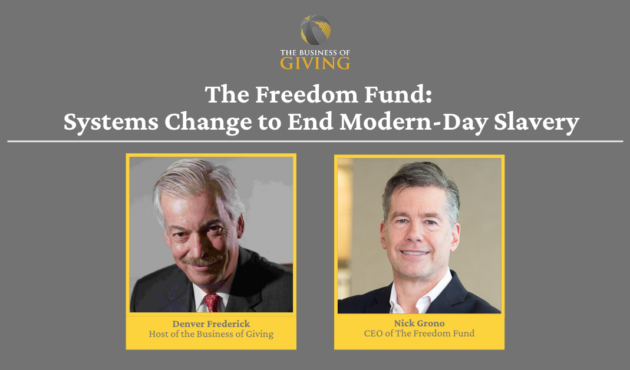 Our CEO Nick Grono spoke with Denver Frederick, host of The Business of Giving podcast, about why modern slavery is so pervasive around the world, and what is being done to address it.

Below is a partial transcript of the conversation. You can listen to the full podcast here.

Denver: Modern slavery is a hidden crime with over 40 million people around the world finding themselves in this horrific situation. Given that it is prohibited under international law in almost every country, why is it so widespread and pervasive? And what is being done to address it? For the answers to those questions, it’s a pleasure to have with us, Nick Grono, the chief executive officer of the Freedom Fund.

Welcome to the Business of Giving, Nick!

Nick: Thanks, Denver. It’s very good to be here.

Denver: The Freedom Fund is the leader in the global movement to end modern slavery. How did the organization come into being?

Nick: It’s interesting. Basically, what happened is that there were three foundations working on this issue separately. And highly unusually, I think, in the philanthropic space, these three organizations decided to come together, pool resources, and set up an organization with a common strategy. And that was the Freedom Fund. We were set up in 2014 with the three organizations: Legatum, Humanity United, and Minderoo as our founders, and we’ve gone on from there.

Denver: And it’s still unprecedented. You don’t hear that happening nearly as frequently as we would like to hear it happening in the sector. So, how would you define modern-day slavery?

Nick: I think often when people hear you talk about modern-day slavery, there’s often a kind of a bit of a surprise like – “What do you mean slavery still exists?” But, of course, it does exist. And what we mean by slavery is a situation where perpetrators, the traffickers, use violence or the threat of violence and force to control other people and force them to work or to provide sex. It goes by many names. So it can be called human trafficking, forced labour, forced marriage, bonded labour, sex trafficking, but it’s that essence of violence and coercion to exploit someone that is the heart of modern-day slavery.

To read the full transcript and listen to the conversation, visit The Business of Giving podcast website.