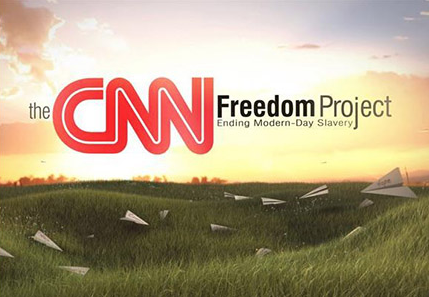 Try and imagine, if you can, an existence where every important decision in your life is controlled by someone else.

An existence where the only concern of the person exploiting you is to make as much profit as possible from your labor or your body. An existence where you and your children are forced to work seven days a week in a stone quarry or a brick kiln in India, and threatened with violence if you try to leave.

Or where you are raped many times a night in a brothel in Kathmandu, and forced to smile and pretend to your “clients” that you are voluntarily offering up your underage body for their enjoyment. Or where, as a farmer from inland Myanmar, the first time you see the ocean is when you are forced onto a Thai fishing boat, to go to sea for 18 months on end, compelled to work 20-hour days, all the while being beaten for not working hard enough.

That’s the kind of exploitation that over 30 million victims of modern slavery around the world experience on a daily basis. Now try and imagine your psychological state if and when you are fortunate enough to escape this life of servitude.

Suffering after liberation
Not surprisingly, most survivors of slavery suffer from significant and disabling mental health problems. Slavery ruthlessly breaks the bonds of healthy human relationships. After years of actual and threatened violence and extreme exploitation, survivors suffer disproportionately from depression, anxiety and post-traumatic stress disorder.

Failure to treat this suffering prevents those escaping servitude from leading “normal” lives. It also greatly increases their risk of being re-trafficked, as perpetrators prey on the vulnerable — and those suffering from acute mental health problems are highly vulnerable.

Given the scale of modern slavery around the world, there is a critical need to better understand the mental health needs of survivors. And given that most victims and survivors are in developing countries with inadequate health infrastructure, it’s necessary to identify effective, low-cost, scalable treatment options that can be used by local organizations to help millions of survivors tackle their trauma.

Breaking the cycle of exploitation
It’s for all these reasons that the Freedom Fund and the Helen Bamber Foundation decided to investigate this issue, and publish a report on ways to begin tackling this critically important challenge. The resulting report, “Addressing Mental Health Needs in Survivors of Modern Slavery” confirmed that slavery survivors continue to suffer from trauma following liberation, and that there’s a desperate need for better treatment options.

The report highlights the benefits of providing mental health support at the same time as other practical assistance for slavery survivors. And it calls for a big research push to identify the most effective ways to address this mental trauma.

Such research will take time, and we can’t wait for the final results to come in before taking basic steps to address the most immediate and pressing mental health needs of survivors. Community groups working on the frontlines of slavery in countries like India and Nepal can be trained in methods such as Narrative Exposure Therapy, in which a therapist works with a patient to create a coherent narrative of their life including emotional reactions to trauma. Such methods have proven effective in many cultural contexts and require only brief training for the practitioner. They can be refined and improved as the research develops.

There is real momentum in the global fight against modern slavery. We are seeing powerful calls for action by political leaders, faith leaders, business leaders and concerned citizens around the world. Most of the focus is rightly on preventing people being enslaved in the first place, and liberating those in servitude. But unless we also prioritize the effective mental health treatment of those coming out of slavery, those most in need of support will continue to suffer from the abuses they have endured, and will be at much greater risk of being re-enslaved — and the cycle of exploitation will continue.

Read the article on the CNN Freedom Project website.