CLOSE
Home / Private: Newsroom / Media / Op-eds / What Exactly Do We Mean by Systems?

What Exactly Do We Mean by Systems? 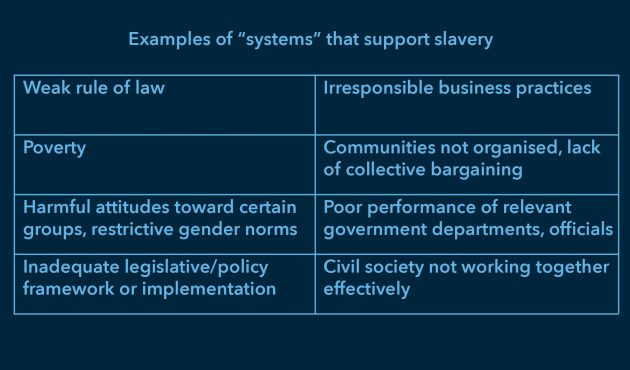 Everyone is talking about systems. Or at least, that’s how it seems in my wonkish corner of the philanthropic world. You can’t attend a conference or even have a meeting without hearing about systems, whether it’s people trying to disrupt them, map them, learn from them, or catalyze them.

We’re not above it at the Freedom Fund, a global philanthropic initiative to end modern slavery. Far from it. We talk every day about trying to “dismantle” the systems that allow slavery to persist. We’ve made evidence of systems change one of our organizational key performance indicators. And indeed, we are often cited as a rare example of systems change in action, in that three of the world’s leading funders of anti-slavery work came together in 2013 to create the Freedom Fund as a way of coordinating their efforts and driving change at scale.

But what exactly are these systems we’re all talking about? And do we risk talking past each other if we’re using different definitions?

I see three fairly distinct ways the term is being used, not just in the anti-slavery sector, but across the social change space.

Read the full article in the Stanford Social Innovation Review.