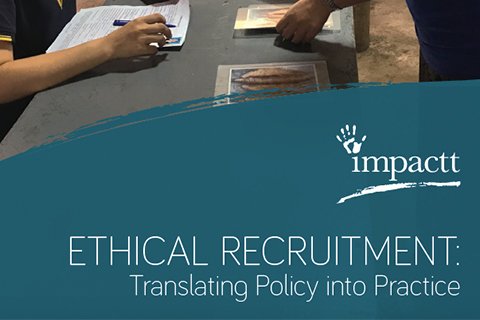 For the longest time, businesses – particularly those that rely on migrant workers – avoided having to think about how their workers made the journey from home to work site. In recent years, recruitment has evolved into one of business’ biggest operating risks, due to the large debts workers often incur over their recruitment journey and their subsequent vulnerability to debt bondage. For the most part, though, rather than actually do anything, industry has been content to remain comfortably mired in an attitude towards recruitment that allows this critical function to remain conveniently mystified.

To try and spark discussion and action on practically implementing ethical recruitment practices,  Humanity United and The Freedom Fund commissioned an independent report by ethical trade consultancy Impactt Limited into Thai Union’s ethical recruitment model. Impactt’s report, Ethical Recruitment: Translating Policy into Practice, explains how Thai Union, the largest shelf-stable tuna company in the world, developed and implemented its policy, the positive impacts and outcomes, and the challenges it encountered.

The goal of TU’s program was to significantly reduce fees for workers and to ensure that the recruitment process is fair, safe, and professional. It is not a ‘zero-cost’ policy, as migrant workers still pay for some travel and documentation costs, but it works to ensure that no illegal recruitment fees are paid. TU directly engaged with its recruitment agencies in origin countries to get their buy-in and to enable them to follow the terms of the policy. TU also worked with a civil society organization, the Migrant Worker Rights Network (MWRN), to develop the policy, assist in pre-departure training of workers, and to monitor implementation.

The results of Impactt’s independent evaluation bring cause for optimism. Under the TU model, workers paid recruitment costs that were three to four times less than the average recruitment fees paid by other workers during the same time span. Workers also reported higher rates of job satisfaction and demonstrated a greater ability to save money every month. The recruitment agency reported that its business had grown, it had professionalized its service, and it was becoming recognized for its ethical credentials.

Is Thai Union’s program perfect? No, of course not. The assessment found that some workers paid more than what was allowed under the policy, though in most cases, this was only slightly more, largely for passport and visa fees requested by officials. In a small number of cases, the fees were unauthorized recruitment agent charges, which TU investigated and reimbursed. However, the assessment noted that this investigation process was challenging for both workers and Thai Union and could be improved upon. It also noted the serious challenge of ensuring that migrant workers, who are in a vulnerable position, feel safe to report any breaches of policy. Working with MWRN helped to address these challenges; however, increasing the time available for MWRN to meet privately with new recruits could further improve trust and knowledge of migrant workers.

If the seafood sector ever hopes to cast off the bad reputation it has earned, it will take the collective and concerted effort by companies getting hands-on with their own ethical recruitment programs and beginning to build a marketplace for ethical recruitment. Impactt’s assessment provides some guidelines and a summary of key learnings for other companies to build upon. Among the most important components are engaging directly with recruitment agencies and workers and embracing an approach of continuous improvement, informed by external monitoring via an independent worker-focused civil society organisation. Challenges with implementation are to be expected – and identifying any breaches and rectifying them is part of the point of an ethical recruitment policy. The key is for the company to manage the process as transparently and fairly as possible, and take action when issues are uncovered.

Critically, if this work is to succeed, the human and resource commitments cannot just come from suppliers; it must also come from the companies that buy the products. No seafood buyer can reasonably claim to be unaware that the low price it demands for a can of tuna or a bag of shrimp is at least partially subsidized by exploitative labour conditions. Claims of concern for worker welfare cannot be accompanied by a refusal to share the costs of ensuring decent working conditions and fair pay. Retailers must uphold their end of the bargain: the true costs of recruitment must be factored into purchasing practices that encourage and reward – or, at the very least, don’t undercut – ethical and transparent practices. And that transparency should be valued. Companies that disclose issues known to be pervasive across the industry and take practical steps to address these and share learnings should be applauded.

Improving recruitment practices is possible – if a company has the will to do it. Although there is still further progress to be made, Impactt’s assessment shows that a company can make major improvements in the recruitment experience of migrant workers and reduce risk of debt-bondage, if they are willing to invest, take action, and get hands-on with the process. The alternative is that companies can continue pretending that everything is just fine…and workers will continue to suffer.