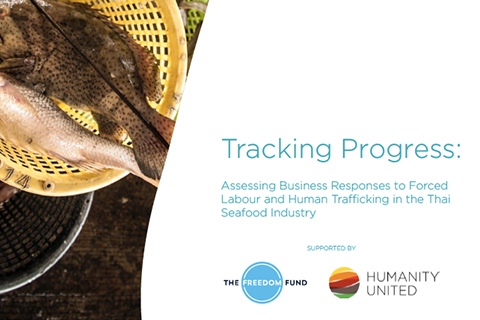 It’s no secret that many of the products that we buy and use every day are made by workers suffering from severe exploitation. There is evidence of forced labour in every tier of corporate supply chains, including seafood. These problems persist, despite years of corporate attention.

Today, Humanity United and The Freedom Fund released Tracking Progress: Assessing Business Responses to Forced Labour and Human Trafficking in the Thai Seafood Industry.  The research, conducted by Praxis Labs, finds that the seafood industry has indeed made some progress. True industry transformation, however, is being undermined by a failure to fundamentally change the business model. In short, decisions are still driven primarily by price, and do not include realistic considerations relating to human rights and environmental sustainability.

This report is a follow-up to a 2016 report that found that the private sector, operating under lax government oversight, had largely absolved itself of all responsibility for practices across their supply chains.

Encouragingly, this new report highlights a number of areas of emerging good practice and progress.

In 2014, for example, only 11% of companies had some degree of traceability in their supply chains; today, 82% of companies can claim to know where some portion of its products are sourced. Recruitment practices are improving, including direct hiring that includes external oversight by NGOs. Some businesses have introduced human rights due diligence that is triangulated with external validation.

Additionally, the Seafood Task Force, an industry-led multi-stakeholder initiative, has also made some progress. Alignment around a single code of conduct should make it easier for suppliers to focus on compliance. Supplier education, farm to plant traceability, and supply chain mapping are also positive trends. The Task Force’s auditable standard for vessels also has the potential to reduce audit fatigue. Businesses across the spectrum are making efforts to work with their suppliers, including providing tools and support with implementation.

These practices, and the progress that they represent, are a good start. But if we scratch the surface, there are large gaps still remaining.

While there are some leading practices emerging, many businesses are often focussing more on “check the box” exercises, rather than prioritising meaningfully improving conditions for workers.

Businesses are pouring money into certifications that are not governed by binding, transparent agreements or external accountability mechanisms – and on vessels in particular, it is extremely difficult to monitor and verify working conditions, as the factors necessary for effective validation of information are absent.

Transparency remains elusive, which means that accountability does as well. Access to remediation also remains problematic, particularly in the absence of any support for unionisation.

The Seafood Task Force too has struggled with many of these same issues; they have been slow to translate policy into practice or hold its membership accountable for protecting the safety and dignity of workers.

Crucially, the report also finds that international seafood buyers are not factoring the cost of ethical practice into their sourcing decisions, which is undermining reform.

The research finds that despite public commitments to change in Thailand – and despite improvements being made – the business model, at its core, remains unchanged. Few seafood buyers are building social and environmental compliance into contract prices, which weakens efforts to promote labour rights. This is not just a pattern in seafood, but in other global supply chains as well.

Brands and buyers need to acknowledge that their own business practices allow – and can actually encourage – forced labour to persist in supply chains.

The industry must shift away from endeavouring to meet buyer demand for cheap seafood by relying on unethical practices. This cost cannot be borne solely by vessels, manufacturers, and others down the chain. These suppliers are typically those with the thinnest margins – sometimes entering into contracts below the cost of production simply to keep a customer – and are thus least well-placed to single-handedly shift the industry towards more responsible practices.

Buyers should be rewarding suppliers that are actively addressing the risk of forced labour, not penalising them by taking their business either to other suppliers or markets outside of Thailand.

The good news is that buyers can change the business model. Some brands and retailers are supporting responsible suppliers to transition to better practices, with consideration given to how to better share and distribute the associated increase in costs along the value chain. Buyers can also enter into longer-term contracts with suppliers that demonstrate a commitment to ethical practices so that responsible suppliers can be confident that they will benefit from investments in ethical practices.

Presently, there is no business case for a shift to ethical supply chain practices. It is up to brands and retailers to create one, and to governments to require one.

Ending forced labour requires a marketplace where buyer demands don’t incentivize the very practices that they claim to abhor.

This extensive report contains eight key findings and dozens of recommendations that, if implemented, will help move the industry closer to the end of reliance on forced labour. Our hope is that the key findings and recommendations in Tracking Progress will help the industry go further down the path to ending forced labour and the exploitation of workers.