Slavery and the limits of international criminal justice 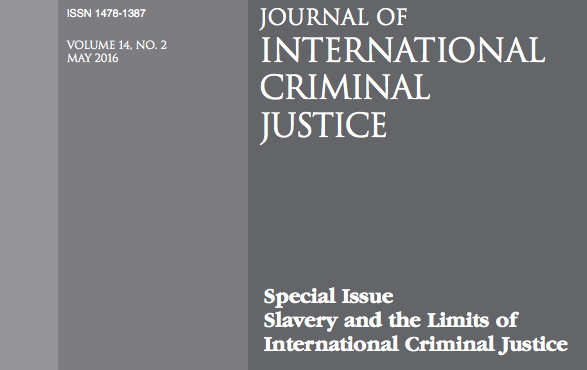 Read the full article here. The introduction is below.

By the best available estimates, between one in every 200 and one in every 400 people currently alive is trapped in a situation of slavery or forced labour. How is this possible, in a world in which the prohibition on slavery is a jus cogens norm of international law? The obligation to prevent, criminalize and punish slavery is one that every state owes to all others (erga omnes). Nor is this an obligation states owe only to each other: in fact, the right to be free of slavery is a human right, codified in the International Covenant on Civil and Political Rights and the regional human rights conventions. What is more, slavery is a crime under international law that apparently attracts universal jurisdiction; and enslavement and sexual slavery can in some cases constitute crimes against humanity.

The tragic reality is that despite the age, breadth and depth of international obligations to prevent, criminalize and punish slavery crimes, these practices not only persist but even remain un-criminalized in many countries. The gap here — between the theoretical protection offered by international law, and the reality of non-enforcement — is wide and shocking — and largely unremarked by international criminal lawyers. International criminal law and justice tend to focus on cataclysmic crimes, especially those associated with armed conflict, political violence and mass atrocity. Contemporary slavery, with its roots in social and economic marginalization, and driven by economic factors, is a different kind of human rights tragedy: it is pervasive, hidden — and all too often accepted. That does not make it any less tragic nor, arguably, any less unjust. Why does contemporary international criminal justice have so little to say about it?