35.8 million people are enslaved across the world 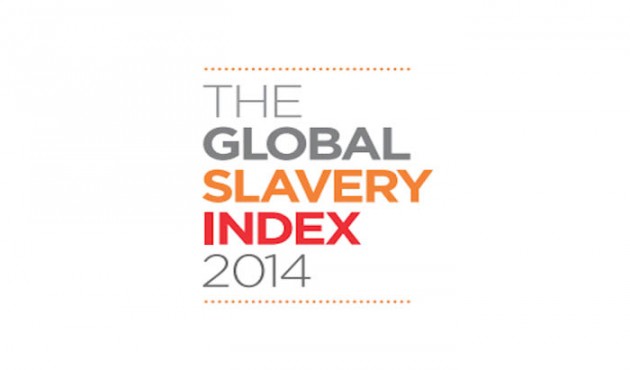 In Europe, over half a million trapped in modern forms of slavery[1], mostly through sexual and labour exploitation.

Improved methodology highlights 23% more people across the world in modern slavery than previous estimated, according to the Global Slavery Index 2014.

Perth & Brussels, 05 November 2014 — An estimated 35.8 million men, women and children around the world are today trapped in modern slavery, 23% more than previously estimated, whether through human trafficking, forced labour, debt bondage, forced or servile marriage, or commercial sexual exploitation.  This is according to the 2014 Global Slavery Index (GSI), the flagship research report published today by the Minderoo Foundation, a global human rights organisation with a mission to end modern slavery in a generation.

The report looks at prevalence (the percentage of a country’s population that is enslaved) as well as the total number of people living in modern slavery in each country.  It shows that Europe[2] is the region with the lowest prevalence of modern slavery in the world, at just 1.6% of the global total. However this still represents an estimated 566,200 men, women and children, who are enslaved mostly through sexual and labour exploitation.  Bulgaria, the Czech Republic and Hungary respectively show the highest prevalence levels in Europe, while Turkey, 15th on the list in terms of prevalence, has the highest absolute numbers, with 185,500 people estimated to be trapped in modern slavery. Iceland, Ireland and Luxembourg have the lowest prevalence, in that order. All 37 countries in Europe criminalise modern slavery.

While the Index estimates that 23% more people are enslaved than reported in 2013, rather than reflecting an exponential rise in the number enslaved over the past, this significant increase is due to enhanced data and methodology. This includes national representative surveys in some of the countries worst afflicted.

Commenting on the report’s findings, Andrew Forrest, Chairman and Founder of Walk Free Foundation, said: “There is an assumption that slavery is an issue from a bygone era. Or that it only exists in countries ravaged by war and poverty. These findings show that modern slavery exists in every country. We are all responsible for the most appalling situations where modern slavery exists and the desperate misery it brings upon our fellow human beings. The first step in eradicating slavery is to measure it. And with that critical information, we must all come together – governments, businesses and civil society – to finally bring an end to the most severe form of exploitation”

An innovation of the 2014 Global Slavery Index is its inclusion of government actions in relation to modern slavery. For the first time, the GSI provides an analysis of government responses based on five objectives that every country should seek to accomplish in order to eradicate modern slavery.  These include identification and support for survivors, an appropriate criminal justice mechanism, coordination and accountability within central government, addressing the attitudes, social systems and institutions that facilitate modern slavery and finally government and business procurement.

“Modern slavery is a hidden crime and notoriously difficult to measure. But Walk Free Foundation is shining a light on this horrific crime with innovative research and each year an even stronger methodology. We are all grateful for Andrew Forrest’s commitment to this issue”, said Mo Ibrahim, founder of the Mo Ibrahim Index and Mo Ibrahim Foundation.

The Index gives the most accurate and comprehensive measure of the extent and risk of modern slavery. It provides an analysis of its prevalence in terms of the percentage of a national population and the total number of people enslaved – country by country, region by region.

In summary, slavery exists in each of the 167 countries included in the Index:

In terms of absolute numbers, India remains top of the list with an estimated 14.29 million enslaved people, followed by China (3.24m), Pakistan (2.06m), Uzbekistan (1.2m, new to the top five), and Russia (1.05m). Together these account for 61% of the world’s modern slavery, or nearly 22 million people.

Lowest: Iceland and Luxembourg have the lowest number of  people enslaved in both prevalence and in absolute numbers, estimated at less than 100 each, closely followed by Ireland with under 300.

Strongest action: An innovation of the 2014 Global Slavery Index is its inclusion of government actions to eradicate modern slavery. Countries identified as leading the fight to end modern slavery include The Netherlands, Sweden, the United States, Australia, Switzerland, Ireland, Norway, the United Kingdom, Georgia and Austria. Taking relative economic capacity into account the list extends to includeThe Philippines and Jamaica, both with strong criminal justice systems, and Macedonia, which provides strong support services for identified victims of modern slavery.

Some countries with the biggest challenges are also taking important steps to tackle the problem. India, the country with the highest number enslaved, has for example strengthened its criminal justice framework through legislative amendments and has increased the number of its Anti-Human Trafficking Police Units.

Government procurement and corporate supply chains: No country has a fully comprehensive response to modern slavery, but many countries have developed a national action plan (101/167) and nearly all are involved in relevant regional response (165/167).  Some also have a national coordination body (140/167).  However the International Labour Organization (ILO) estimates the vast majority of forced labour occurs in the private economy. Only three of the 167 governments are making some effort to address modern slavery in government procurement and in the supply chains of businesses operating in their countries. These are: the United States; Brazil and Australia.

Weakest action: Those countries with the weakest responses to modern slavery in 2014 are: North Korea; Iran; Syria; Eritrea; the Central African Republic; Libya; Equatorial Guinea; Uzbekistan; the Republic of the Congo; and Iraq.

About the Index: The Global Slavery Index was created in consultation with an international panel of experts from international organizations, think tanks and academic institutions.  The Index has been endorsed by individuals including Former Secretary of State Hillary Clinton, Former Prime Ministers Tony Blair, Gordon Brown and Julia Gillard; and leading philanthropists, Bill Gates, Sir Richard Branson and Mo Ibrahim, as well as academics, business leaders, and policy makers.

Research for the Index was undertaken by teams in Australia, the US and in the UK. The increase in the total figures recorded in the 2014 Report is primarily due to increased resources in improving the methodology, including nationally representative random-sample surveys undertaken in seven countries, which provided data points for ten countries. In addition, we obtained data from a further nine random sample surveys, increasing the number of survey countries to a total of 19. These surveys have enabled Walk Free Foundation to have a more precise measurement of the number of people enslaved.

For the purpose of the GSI, ‘Europe’ includes all EU and EFTA member states, the Balkans and Turkey, but excludes European microstates Andorra, Monaco and San Marino. Armenia, Azerbaijan, Belarus, Georgia, Moldova, Russia and Ukraine are included in the ‘Russia and Eurasia’ geographical grouping.

[1]Please note that throughout, the terms ‘enslaved’ and ‘slavery’ are used as synonyms of ‘modern slavery’ and should not be interpreted to suggest traditional slavery in which people were held in bondage as legal property, which has been outlawed in every country across the word.

[2]For the purpose of the GSI, ‘Europe’ includes all EU and EFTA member states, the Balkans and Turkey, but excludes European microstates Andorra, Monaco and San Marino. Armenia, Azerbaijan, Belarus, Georgia, Moldova, Russia and Ukraine are included in the ‘Russia and Eurasia’ geographical grouping.