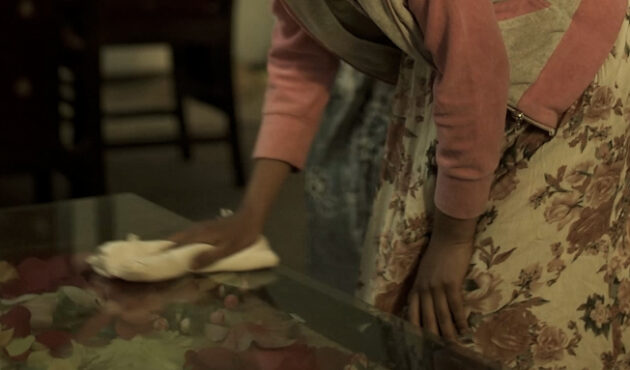 While children doing domestic work or chores is not always exploitative or harmful to the child, certain forms of child domestic labour are considered to be ‘domestic servitude’, including when occurring at a very young age and impairing a child’s development and emotional wellbeing, as well as when characterised by exploitative and harmful working conditions, inability to leave the job, excessive control and confinement, and long hours.

The report also reveals that child domestic workers live in stressful conditions that are harmful to their development: on average the girls were working 55 hours per week with 40% not given a single day of rest during the week; 35% are expected to be available to work day and night; and 22% have experienced physical violence at the hands of her employer/host.

With over 50% of girls ‘fostered’ (where girls from poorer, rural communities are relocated under the guise of being cared for) in private homes, ‘care vacuums’ are created, making girls extremely vulnerable to exploitation, abuse and violence.  The often ambiguous relationships that exist between the child and the host family or employer have made it difficult to measure the number of children in domestic work, or experiencing exploitation, with many girls not recognising themselves as domestic workers.

Dr. Annabel Erulkar, Population Council’s Ethiopia Country Director and lead author of the report said: “Unlike previous studies, which focus purely on those who self-identify as domestic workers, this report takes into consideration all those who are effectively in domestic work, including children who do not classify themselves as such, but are doing a gruelling amount of domestic labour in the home of an extended family member or in a fostering arrangement. While some fostering arrangements can be beneficial to children, in other cases, extended family or fostering relationships can be used to mask child labour.”

Daniel Melese, The Freedom Fund’s Ethiopia Country Representative added: “This report reveals the shocking number of girls who are victim of exploitation behind closed doors.

“As a result of gendered social norms, the burden of domestic work falls on the shoulders of girls and young women, and this research lays bare the loss of childhood that is happening every day – long hours, little or no pay, violence and abuse – at the hands of hosts and employers who deny these children the health, personal development and schooling they are entitled to.

“We call for clear actions by the Ethiopian government and its constituencies, civil society organisations and community leaders to eliminate the engagement of young children in such harmful forms of labour, and address – often harmful – social norms so the young women and girls already in domestic work are protected.

“For the adolescent workers, we aim to advocate for better working conditions, challenge norms that allow exploitation to continue, and include domestic work under the Labour Law with special provisions for young Ethiopians.”

The report is based on a representative survey of 2,767 girls working as domestic workers in selected neighbourhoods of the Ethiopian capital city. The report was prepared by Annabel Erulkar, Lemi Negeri, Eyasu Hailu from the Population Council in Ethiopia.

The Freedom Fund is a leader in the global movement to end modern slavery and human trafficking. We identify and invest in the most effective frontline efforts to eradicate modern slavery in the countries and sectors where it is most prevalent. Partnering with visionary investors, governments, anti-slavery organisations and those at risk of exploitation, we tackle the systems that allow slavery to persist and thrive.

The Population Council confronts critical health and development issues. Through biomedical, social science, and public health research in more than 50 countries, the Council works with partners to deliver solutions that lead to more effective policies, programs, and technologies that improve lives around the world.

The Office to Monitor and Combat Trafficking in Persons leads the United States Department of State’s global efforts to combat human trafficking through the prosecution of traffickers, the protection of victims, and the prevention of human trafficking. In 2017 the TIP Office launched the Program to End Modern Slavery (PEMS), a ground-breaking U.S. foreign assistance program authorized and funded by Congress with a total of $175 million to date. The Program aims to support transformational efforts that seek to achieve a measurable and substantial reduction of the prevalence of modern slavery—also known as human trafficking—in targeted populations in specific countries or regions worldwide

Photo credit
The included image is from one of eight TV spots released between June and July 2022 as a part of Freedom Fund’s Norms and Behaviour Change Campaign ‘Chora’ which means dawning in Amharic. The aim of the campaign is to improve the treatment of child domestic workers by encouraging employers to reduce working hours and enable access to education. The ads were developed by The Freedom Fund and Girl Effect, and photography by Urban Production. All those pictured are actors.