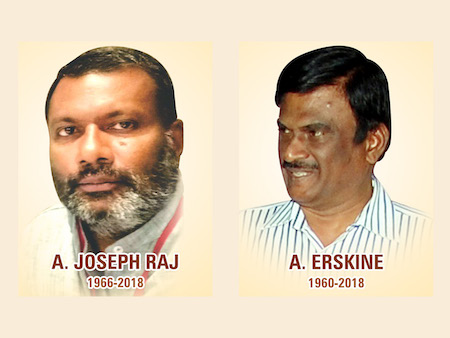 On 4 October, we received tragic news from south India that the directors of two of our partner organisations had died in a car crash.  The individuals were Mr Arunothayam Erskine, Director of SPEECH and Mr Joseph Raj, Director of TEST. Joseph and Erskine were incredibly dedicated NGO leaders and deeply committed to our collective efforts to tackle bonded labour and trafficking.  Their loss will have a major impact on their organisations, as well as the wider movement in the region.

Today there will be a Memorial meeting in Tamil Nadu to pay tribute to these outstanding leaders and to support each other. Erskine and Joseph’s families, as well as all of our NGO partners in Tamil Nadu, and Freedom Fund advisors and other allied organisations will join in the meeting, organised by the Tamil Nadu Alliance.

At the time of the accident, Joseph and Erskine were on their way to a financial management training that the Freedom Fund had organised – the crash was due to heavy rainfall and poor road conditions.  Our thoughts are also with Mr Jaya Prakash and Mr Selvam who were travelling in the same vehicle. Mr Selvam suffered serious injuries but has now been released from the hospital and it is hoped he will make a full recovery. Mr Jaya Prakash experienced minor injuries.

SPEECH and TEST are locally-based NGOs that have been working as part of the Freedom Fund’s southern India hotspot program since 2015, to support the rights of adolescent girls and women working in the textile industry.  Both these leaders thought deeply about the strategies being used by their organisations and they sustained the commitment of their staff, as well as members of hundreds of community groups, to deliver real results.  In villages of Virudhnagar district, many young women are able to assert their rights and build a better life for themselves because of the skills, livelihoods and human rights awareness that Erskine and Joseph helped to bring to them. Working in one of the places where it is needed most, they have made a lasting and significant contribution to the global movement.